Enterprises plan to increase hybrid cloud usage, with 91% stating hybrid cloud as the ideal IT model, but only 18% stating they have that model today, according to Nutanix. Application mobility across any cloud is a top priority for 97% of respondents – with 88% of respondents saying it would “solve a lot of my problems.” 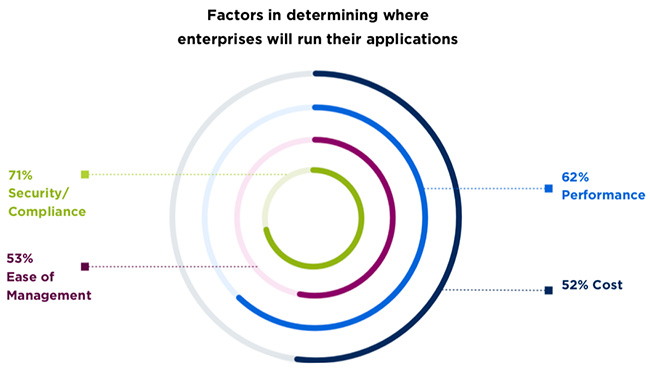 IT decision makers ranked matching applications to the right cloud environment as a critical capability, and 35% of organizations using public clouds overspent their annual budget. When asked to rank the primary benefits of hybrid cloud, interoperability between cloud types (23%) and the ability to move applications back and forth between clouds (16%) outranked cost (6%) and security (5%) as the primary benefits.

In roles centered on agility and digital transformation, IT teams understand that runtime environments for enterprise apps change constantly. Respondents indicated a need for greater orchestration and application mobility across cloud environments, as they seek flexibility to move apps to the “right” cloud on a more dynamic basis.

Shadow IT practices that circumvent enterprise IT teams are posing a significant challenge to forecasting and controlling public cloud spend with well over half of respondents (57%) reporting one or more incidents of shadow IT.

Organizations that use public cloud spend 26% of their annual IT budget on public cloud. Perhaps most striking is the fact that only 6% using public cloud came in under budget, while nearly six times as many (35%) overspent in their use of public cloud resources.

Security is top of mind for determining workloads: 71% of respondents surveyed for the report ranked data security and regulatory compliance as the top factor in determining where to provision their workloads. This was followed by performance at 62%, ease of management at 53%, and cost at 52%.

Finding hybrid IT talent is difficult: With clear benefits to a hybrid model, respondents say scarcity of hybrid experts is a challenge, with 54% claiming talent retention is part of the problem.

EMEA is expected to surpass the Americas with hybrid cloud adoption: Regionally, the Americas reported greater use of hybrid clouds now (22%) and within 12 months’ time (31%). However, the two-year outlook has EMEA (43%) surpassing the Americas’ hybrid plans (39%) and APJ (39%) catching up.