Lacework released its cloud threat report, unveiling the new techniques and avenues cybercriminals are infiltrating to profit from businesses. 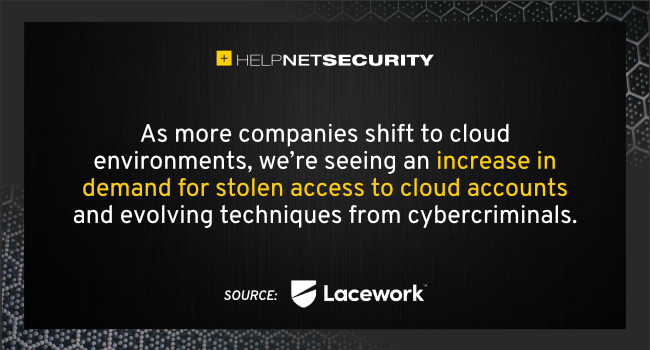 The rapid shift of applications and infrastructure to the cloud creates gaps in the security posture of organizations everywhere. This has increased the opportunities for cybercriminals to steal data, take advantage of an organization’s assets, and to gain illicit network access.

As corporate infrastructure continues to expand to the cloud, so do opportunistic adversaries as they look to capitalize on the opportunity.

Illicit access into cloud infrastructure of companies with valuable data/resources or wide-reaching access into other organizations offers attackers an incredible return on investment. In particular, Amazon AWS, Google Cloud, and Azure administrative accounts are gaining popularity in underground marketplaces.

A variety of malicious activity originating from known adversary groups and malware families were observed:

Cpuminer, the open-source multi-algorithm miner, has been legitimately used for years. However, an increase in its illicit use for cryptomining altcoins was observed.

Monero and XMRig are the most common accounts for cryptomining against cloud resources, hence activity involving lesser-seen coins and tools may be more likely to go undetected.

A range of telemetry in both product deployments and custom honeypots were captured, which allows to see trends relevant to cloud defense purposes. For these sources, many cloud-relevant applications are continually targeted, but AWS S3, SSH, Docker, SQL and Redis were found to be by far the most targeted.