Although many public and private sector organizations have elements of SASE in their IT stack, only 12% worldwide currently have a comprehensive SASE architecture, according to NetMotion. 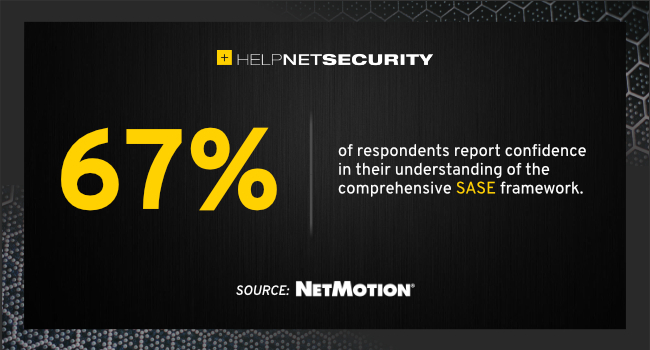 As the unexpected growth of remote working greatly accelerated conversations around secure remote access solutions, NetMotion surveyed 750 IT leaders, including CIOs, CTOs, IT and network directors, as well as security analysts across legal, finance, public safety, transportation, healthcare and government sectors in Australia, Germany, Japan, the United Kingdom and the United States. The goal was to quantify and qualify the hype around SASE while ascertaining the popularity of various network and security solutions deployed by organizations around the world.

The survey also found that two-thirds (67%) of respondents report confidence in their understanding of the comprehensive SASE framework. However, one quarter of organizations (26%) do not embrace the SASE philosophy at all (nor do they have immediate plans to), while just over one-third (35%) currently embrace it in less than half of their technology stack.

Other key survey findings include:

“While SASE is likely to represent the future of network availability, optimization and cybersecurity, our survey revealed that the perception of accelerated adoption is much greater than the current reality, which is that the vast majority of enterprises are not yet close to fully embracing this framework,” said Christopher Kenessey, CEO and President, NetMotion. “Our survey makes it clear that we’re only at the very beginning of the SASE evolution, and that many organizations don’t yet fully appreciate the benefits of going all in on this approach.”

Coined by Gartner in 2019, Secure Access Service Edge (SASE) represents a security framework or philosophy that combines the capabilities of SD-WAN and VPN technologies with cloud-native security functions such as zero-trust network access, CASB, firewalls and other technology.

At its heart, SASE is an amalgamation of many existing tools coming together to help businesses reduce network complexity, deliver better security and reduce costs – all things that today’s distributed organizations desperately need.

One of the main factors inhibiting greater SASE adoption is that only 4% of organizations have migrated fully to the cloud, with just over half (51%) having the majority of their apps and services in the cloud, according to our findings.

With organizations slow to adopt a comprehensive SASE stack, it is no surprise that the data also revealed a continued reliance on enterprise VPNs. In fact, over 50% of respondents reported that their organization relied most heavily on VPN for secure remote access during the pandemic.

VPNs proved most popular among law firms (56%) and financial service organizations (49%), while 56% of private-sector organizations reported having utilized VPNs for their employees. Public sector leaders, on the other hand, reported only 29% VPN adoption, instead prioritizing cloud secure web gateways (37%) and firewall-as-a-service (42%).

These results suggest that modernizing legacy technologies, such as VPNs, firewalls, and secure web gateways (SWG), was a more attractive initiative to IT leaders than the adoption and implementation of new solutions, such as control access security brokers (CASB), ZTNA and edge content filtering, especially since most organizations had goals of scaling existing tools rather than attempting a forklift upgrade.