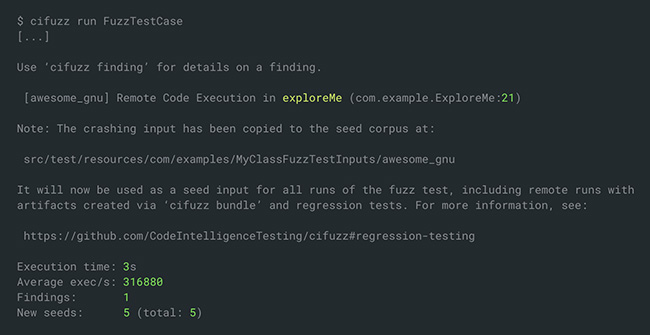 Fuzz testing, which can be seen as a complementary approach to unit testing, is gaining popularity in the open-source community. Google’s Open-Source-Security (OSS) team recently reported more than 40,500 bugs in 650 open-source projects have been detected through fuzz testing. However, fuzz testing remains new to most developers outside the OSS and security community.

A recent study among Go developers indicates that less than 12% of all participants use fuzz testing at work, citing a lack of understanding as well as challenges with implementation as key reasons for low adoption.

Java developers can improve the security of their apps

Code Intelligence’s new open-source tool aims to tackle these challenges by making fuzz testing accessible and usable for all developers directly from their command line or IDE. By introducing new fuzzing capabilities for Java, CI Fuzz CLI enables continuous application security testing directly in the CI/CD process. This is especially valuable to companies with cloud-based products and services who want to develop a mature DevSecOps pipeline.

“With the CI Fuzz CLI, Java developers can now improve the overall security and robustness of their applications with confidence and ease. It takes just three commands to set up and run a fuzz test. The tool comes with ready-to-use integrations for Maven, Gradle and Bazel. With a JUnit setup in place, developers can even run fuzz tests directly from their IDE,” said Werner Krahe, Product Director at Code Intelligence.

“If you’re completely new to fuzzing, I recommend starting with a simple test setup. Use your pre-existing unit tests as a template to run local fuzz tests on small libraries and utils. After a while, you could take it further and apply it to more complex testing setups. Ultimately, fuzz testing will provide the best results when running continuously in your CI/CD,” Krahe concluded.

“Code Intelligence helps developers ship secure software by providing the necessary integrations to test their code at each pull request, without ever having to leave their favorite environment. It’s like having an automated security expert always by your side,” said Thomas Dohmke, the CEO of GitHub.