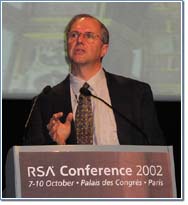 It’s been quite a speech, the one delivered by Craig Mundie – Senior Vice President and CTO Advanced Strategies and Policy here at the RSA Conference in Paris.

Some of the things he said is what we’ve all been reading in the news for what it seems like ages now: “Hackers are smarter, computers are better, threat continues to evolve. Computer systems are becoming sophisticated. Products are less secure than they should be.” I believe that everyone attending the RSA Conference knows that, or they shouldn’t be involved with computer security in the first place.

What I’ve been waiting to hear is something “real” on what they are planning but all that was presented were statistics. The numbers displayed: 78% of large UK businesses suffered malicious security incidents, 95% of all US breaches are because of misconfiguration, etc. What I wanted to see is another chart, the one displaying how many of those compromised systems were actually running Microsoft software. That he didn’t show.

There’s been more, but I don’t really want to bore you with it, it’s what we’ve heard before on many occasions.

The question of open source security has been raised, and some statistics were given – look at the slide below. Basically, the CTO was portraying open source software security as a myth. He said that if you have the opportunity to look at the code it doesn’t mean that you actually do it. He forgot to say that the open source community is huge and if one person doesn’t look at the code, someone else will, and that person will share a solution to a problem with others. 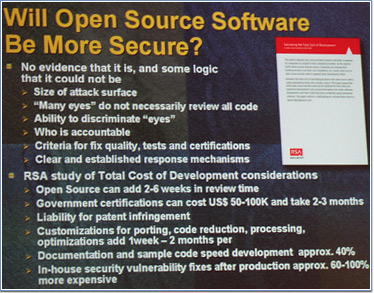 Another thing that Microsoft is announcing is that they began to order outside audits of their products in order to minimize the problems present in their software. The results of those audits are still to be seen because they take a lot of time. On the other hand, Mr. Mundie says that the problem with open source is that you have to spend much more time reviewing the code. Why? You have an open community of developers ready to share their knowledge and on the other side Microsoft employs people to do the audits. That probably goes like this: you search for a company, review their credentials, negotiate a price, signing non-disclosure agreements, make the audit in a controlled environment, etc. Is that quicker than making a product open source and having people contribute to its development?

In order to justify the insecurity of Microsoft products, Mr. Mundie also points out that programming is too error-prone and that the complexity of the evolving computer systems is too fast for people to comprehend. This is, unusual, at least, when coming from a CTO of the biggest software company in the World. He’s really trying to tell us that all the money that closed source software has earned them is not enough to employ quality programmers? That seems to be the biggest problem in Microsoft – it’s probably not the programmers, they probably have extremely qualified people, but rather the approach that they take when developing software. They should take a minute and stop thinking only about money and think about the users and their needs to have real “trustworthy computing” when using their products.

Sometimes I think that the only places Microsoft really thinks about the users and security is in the ads and in the speeches, the results are nowhere to be seen. And the excuse that security takes a lot of time to achieve is not to be even taken into consideration anymore, if the open source community can achieve it, why such a corporate giant can’t?

Last, but not least, the number of Security Bulettins Microsoft issued this year until now is 57.