Experts at SophosLabs are warning internet users of a series of spam campaigns which pretend that the recipient has won a FIFA-sponsored lottery in an attempt to steal bank account information.

The messages prey on interest in the Football World Cup tournament, scheduled to take place for the first time in South Africa in 2010 and claim that recipients have been selected to receive a million US dollars. FIFA, the international football governing body, is so concerned about the email scams that it has posted a warning on its website.

“Email scammers are attempting to trade off the good name of one of the world’s greatest sporting tournaments. Everyone should be suspicious if they are unexpectedly told they have won a fortune,” said Graham Cluley, senior technology consultant for Sophos. “Computer users who fall for this trick will be feeling as sick as a parrot when their bank accounts are emptied and they find they have become the victim of identity fraudsters.”

Sophos reminds users to be wary of unsolicited emails, and recommends companies run a consolidated defence against spam and viruses at their email gateway. 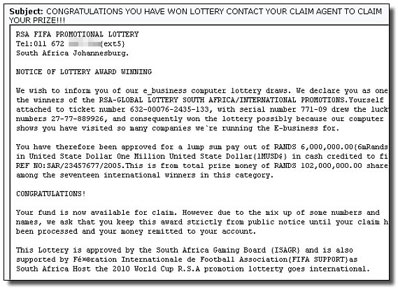 News and photo courtesy of Sophos.