Sophos is warning social networking users of the dangers of allowing strangers to gain access to their online profiles, following new research into the risks of identity and information theft occurring through global phenomenon Facebook. Compiled from a random snapshot of Facebook users, Sophos’s research shows that 41 percent of users, more than two in five, will divulge personal information – such as email address, phone number and date of birth – to a complete stranger, greatly increasing their susceptibility to ID theft.

The Sophos Facebook ID Probe involved creating a fabricated Facebook profile before sending out friend requests* to individuals chosen at random from across the globe. To conduct the experiment, Sophos set up a profile page for ‘Freddi Staur’ (an anagram of ‘ID Fraudster’), a small green plastic frog who divulged minimal personal information about himself. Sophos then sent out 200 friend requests to observe how many people would respond, and how much personal information could be gleaned from the respondents. 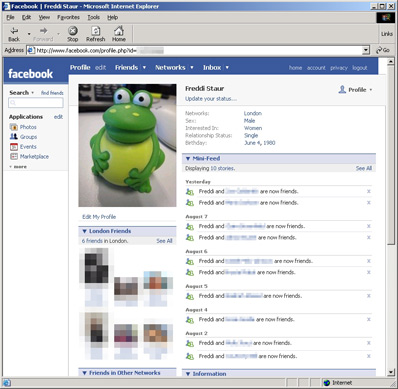 “Freddi may look like a happy green frog that just wants to be friends, but actually he’s happy because he’s just encouraged 82 users to hand over their personal details on a plate,” said Graham Cluley, senior technology consultant at Sophos. “While accepting friend requests is unlikely to result directly in theft, it is an enabler, giving cybercriminals many of the building blocks they need to spoof identities, to gain access to online user accounts, or potentially, to infiltrate their employers’ computer networks.”

The full results of the Sophos Facebook ID Probe are as follows:

In the majority of cases, Freddi was able to gain access to respondents’ photos of family and friends, information about likes/dislikes, hobbies, employer details and other personal facts. In addition, many users also disclosed the names of their spouses or partners, several included their complete rÃ©sumÃ©s, while one user even divulged his mother’s maiden name – information often requested by websites in order to retrieve account details.

“What’s worrying is how easy it was for Freddi to go about his business. He now has enough information to create phishing emails or malware specifically targeted at individual users or businesses, to guess users’ passwords, impersonate them or even stalk them,” explained Cluley. “Most people wouldn’t give out their details to a stranger in the street, or even respond to a spam email, yet several of the users Freddi contacted went so far as to make him one of their ‘top friends’. People need to realise that this is still unsolicited communication, despite it occurring within Facebook, and users must employ the same basic precautions – such as not responding in any way – to prevent exposure to wrongdoers.”

As well as the successful friend requests, a number of users unwittingly enabled Freddi to gain access to their profile information simply by sending response messages such as “Who are you?” and “Do I know you?” back to his Facebook inbox. Sophos experts note that users’ profiles can be protected from such exposure by adjusting the privacy controls within their Facebook account settings.

“It’s important to remember that Facebook’s privacy features go far beyond those of many competing social networking sites. This is about the human factor – people undoing all that good work through carelessness and being preoccupied with the kudos of having more Facebook friends than their peers, which could have a serious impact on business security, if accessed in the workplace,” continued Cluley. “Of course, some businesses may already be considering blocking Facebook for productivity reasons – but equally, other companies will see business benefits in this type of interaction, hence it’s important that the site is used sensibly and securely.”

In addition to these findings, Sophos poked** a further 100 random Facebook users to see if this form of communication would elicit the same response and encourage people to let Freddi access their details. However, just eight people responded, with only five revealing personal information.

“Curiously, while so many users were perfectly willing to make friends with Freddi – despite knowing nothing about him – very few wanted to engage in casual poking, suggesting that, true to the site’s ethos, Facebook users are primarily interested in commitment and friendship,” added Cluley.

*Facebook users can either accept or reject incoming friend requests. If accepted, they allow the sender to gain access to their Facebook profile. Users can also choose whether to allow the sender to see all of their details, or restrict them to viewing a limited section of their profile

**‘Poking’ is a way for Facebook users to interact with one another. According to the Facebook website, it is a feature designed “without any specific purpose”. When a user is poked an icon appears on their Facebook homepage, with the option to ‘remove poke’ or ‘poke back’. By choosing to poke back, the user allows the initial sender to view their profile information for the next seven days.