The Securities and Exchange Commission continued its assault on stock market e-mail spam by suspending trading in the securities of three companies that haven’t provided adequate and accurate information about themselves to the investing public.

The trading suspensions are part of the Commission’s Anti-Spam Initiative announced earlier this year that cuts the profit potential for stock-touting spam and is credited for a significant worldwide reduction of financial spam. A recent private-sector Internet security report stated that a 30 percent decrease in stock market spam “was triggered by actions taken by the U.S. Securities and Exchange Commission, which limited the profitability of this type of spam.”

In addition, spam-related complaints to the SEC’s Online Complaint Center have been cut in half: 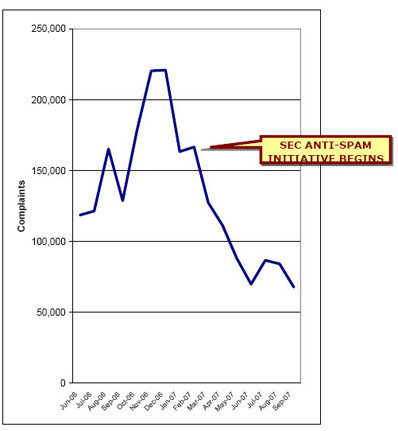 The SEC is moving aggressively against stock market spam that has been clogging our e-mail inboxes for too long. Because of our aggressive enforcement efforts, there has been a reported 30 percent drop in financial spam, and that means fewer investors are getting ripped off.

Since the March 8, 2007 launch of its Anti-Spam Initiative to combat spam-driven stock market manipulations, the Commission has suspended trading in the securities of 39 companies and has brought several spam-related enforcement actions.