iAlertU is a simple utility that turns your MacBook into a motion sensitive remote controlled alarm system. I cannot think a lot of useful ways of using the software, but the concept is rather unique, so I tested it. While discussing the software with one of my colleagues, they came across a couple of situations the software can be of use for them – especially in their cubicles while other people are roaming around. From the physical security point of view, the software can record the face of the culprit who just stole your computer, but as you will see later in the article, this functions is very buggy.

For running iAlertU, you will need MacBook or MacBook Pro, OS X 10.4 or higher, Quicktime 7.1.3 or higher. Also, if you want to use iAlertU’s email functionality you will also need a valid email account configured in Mail.app. 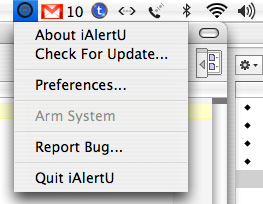 The application has just over 3MB and the installation is pretty straightforward. iAlertU installs its icon in the menu bar.

There are just a couple of setup steps you need to play with including alarm duration, motion sensitivity, as well as triggers.

The software uses iSight for image capture, so if someone mangles with your computer, iSight will record him and afterwards save the image. There is also a possibility of sending the image automatically over e-mail, but this option didn’t work with me. I tested a number of e-mail accounts and scenarios, but without any luck. 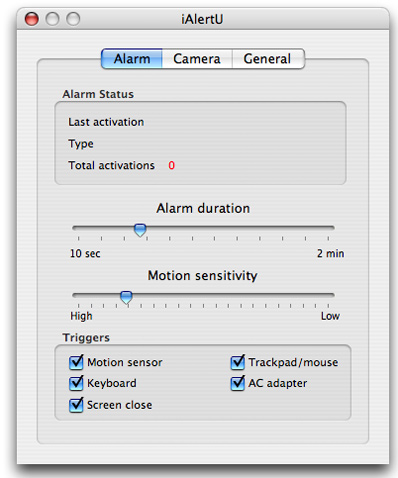 To arm the alarm system press and hold the menu button on your Apple remote control once and you should hear one chirp indicating the alarm is armed. If you don’t use your remote, or you already lost it (like I did) you can manually arm the system through the menu icon. While the alarm triggers, the screen starts flashing and the audio starts beeping.

To deactivate the alarm press and hold the menu button on the Apple remote control once and you will hear 2 chirps and you will be returned to your desktop. To disarm the iAlertU without the remote you can enter your password using the keyboard. It doesn’t matter if you tried typing other text characters, as soon as you do real “character combo” the system will unlock. Image of the “attacker” is shown in the Preferences->Camera portion of the program setup. 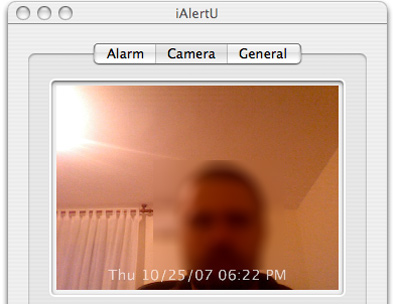 Over the weekend I will write a long list of bugs I encountered with iAlertU, but the developer is constantly releasing new versions, so in the near future we might get THE software alarm system for our Macs.