In this all-new, expanded, second edition of Hacking: The Art of Exploitation, author Jon Erickson again peels back the skin of arcane exploits to explain what happens in the code—and the underlying logic of attacks. 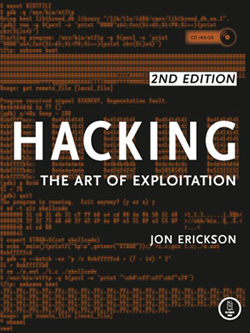 As readers explore each technique, they not only learn about a particular security flaw, but also why most software is insecure. At nearly twice the size of the first edition, and including a new introduction to the complex, low-level workings of computers, this 2nd edition of Hacking offers readers more than ever, as they learn how to:

Many people call themselves hackers, but few have the strong technical foundation needed to really push the envelope. Countless books on hacking only skim the surface, presenting existing exploits without explanation or a focus on understanding. But running someone else’s code can only get you so far. By revealing the science and reason behind the code, Hacking: The Art of Exploitation brings readers right into the creative world of hacking.