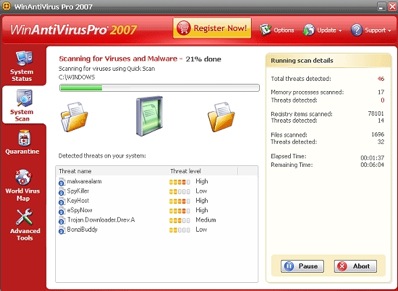 A lawsuit filed in Seattle’s King County Superior Court alleges that internet users were coerced into purchasing the software after pop-up adverts were sent via the Windows Messenger Net Send system.Ã‚Â  Consumers who downloaded the software are said to have unwittingly bombarded other computer users with pop-up messages advertising pornography and drugs to improve sexual performance every two seconds.

“Scammers have been known to bombard a PC with nuisance pop-up adverts, and then follow them up with further messages that resemble system alerts to try and fool the unwary into downloading a ‘solution’ to fix the problem.Ã‚Â  You don’t even have to be browsing the web to have these nuisance messages appear – just being connected to the net can be enough,” said Graham Cluley, senior technology consultant for Sophos.Ã‚Â  “Scam software like this gives the real security industry a bad name.Ã‚Â  Home users and businesses need to have a legitimate solution in place to prevent these kind of underhand practices being used to sell software.”

Sophos experts note that this is not the first that time that Windows Messenger Net Send, which is normally used by a company’s system administrator to send systems messages to users inside the organisation, has been used to send consumers’ anonymous messages that simulated security warnings.Ã‚Â

In October last year, Washington’s Consumer Protection High-Tech Unit successfully sued HoanVinh V. Nguyenphuoc, owner of FixWinReg, for just this.Ã‚Â  Nguyenphuoc was ordered to pay USD 25,000 in attorneys’ costs and fees, and will have to pay an additional USD 75,000 in civil penalties if he sends Net Send messages again to promote products or services.