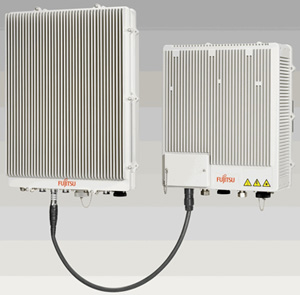 The BroadOne LS LTE eNodeB family is based on a new architectural concept and will be available in distributed and all-in-one versions. The eNodeBs include superior antenna technologies comprising advanced DSPs to augment advanced RF technology. The BroadOne LS LTE series employs a distributed architecture, consisting of a Remote Radio Head (RRH) and a Base Band Unit (BBU). The BBU comes in both indoor and outdoor models to meet the diverse deployment environments that exist in the network today. The RRH is designed to take advantage of the lower operational cost of an all-outdoor deployment.

The RRH of the BroadOne LS LTE eNodeB incorporates a high-output amplifier, which uses a gallium-nitride (GaN) High Electron Mobility Transistor (HEMT) device that was developed based on ultra-high-speed transistor technology patented by Fujitsu. This device is coupled with Fujitsu digital pre-distortion technology, which already has a proven track record in 3G systems, to create two high-output power transceivers packaged in a single unit. These technologies allow for efficiencies never before seen in the industry, reducing the power consumption by half over current technologies.

The RRH of the BroadOne LS LTE eNodeB is compact and light weight, enabling installation anywhere there is fiber, up to 20 km from the RRH. The highly efficient design provides low operating costs as less heat translates to no fans, no filters, or any other moving parts. By combining world-class energy efficiency and world-class design, Fujitsu has significantly reduced the costs associated with installing and operating base stations.