The results of a survey by Harris Interactive found that nearly two thirds of mobile device owners are concerned about the security of their devices. The survey, which polled 1,812 U.S. adults who own mobile devices, shows that security concerns are preventing many users from adopting new mobile services for financial transactions and shopping. Meanwhile, mobile spam was also shown to be impacting a significant portion of mobile device owners. 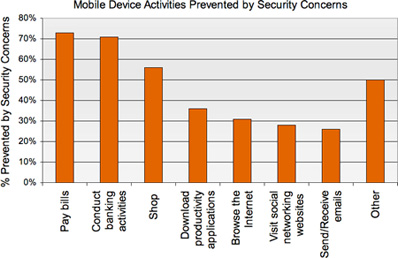 Although new applications and services are rapidly emerging for mobile devices, survey results showed that users’ perception of security is proving to be a significant barrier to their adoption, especially for mobile financial transactions. Noteworthy findings include:

Mobile devices are now an integral part of today’s busy lifestyle, and new applications and services are proliferating to support the need for on-the-go convenience. Mobile operators also have a vested interest in supporting these offerings as an additional revenue stream. However, as convenient as these offerings are, the data from this study suggests that users may require additional assurance that mobile transactions can be conducted securely before they are willing to fully leverage these services.