It was only last month that the New York Times was tricked into featuring on their website a malvertisement that took over the visitors’ browser and tried to make them think that their computer is full of viruses and that they needed to buy antivirus software (fake, of course). 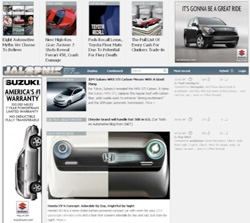 It served as a warning to every ad sales team there is, but apparently sometimes a warning isn’t enough – a good social engineer can make you slip. And that is what happened to Gizmodo’s and Gawker’s teams. They were fooled into running malicious Suzuki ads through which hackers were trying to peddle scareware.

To their credit, both sites have apologized for putting people at risk and have advised them to run legitimate anti-malware software to get rid of the unwanted “visitor”. Gizmodo further apologized it took them long to figure out what was going on – apparently, their staff uses OS X and Linux.

Gawker went one step further. In a praiseworthy bid to warn publishers, they made public their email correspondence with the scammers. The Business Insider published it in its entirety, including the final Gawker’s warning:

But as far as malware distributors go, this guy is easily one of the most convincing I’ve ever seen. I doubt George is his real name, but whoever it is definitely worked in online ad sales at some point.”