Earlier today, on the official White House blog, it has been announced that the post of Cybersecurity Coordinator will be filled by Howard A. Schmidt, a well-known name in the information and computer security arena. 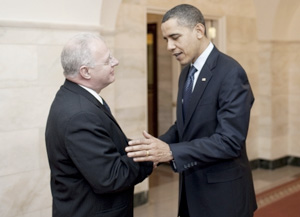 Schmidt, who used to be a security adviser under the Bush administration, is the president of the Information Security Forum, and has served in the past as CSO for Microsoft and as cyber security chief for eBay. He has worked as an advisor to the FBI, and has a record of 31 years in government service.

It seems that all sides will be satisfied with this choice. According to Yahoo! News, Roger Thornton, CTO for Fortify Software, says that Schmidt has all the qualities required for fulfilling such a demanding position: thorough knowledge of the technology involved, a broad management experience, and good coordination skills that will allow him to “get people to compromise and move things forward.”

You can read our interview with Howard Schmidt in issue 11 of (IN)SECURE Magazine.