Among all the search engines and ISPs around the world, Google has taken the first step towards transparency when they revealed their Government Requests tool on Tuesday: 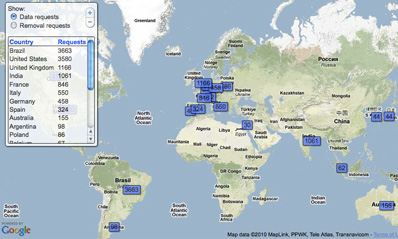 “Like other technology and communications companies, we regularly receive requests from government agencies around the world to remove content from our services, or provide information about users of our services and products. The map shows the number of requests that we received between July 1, 2009 and December 31, 2009, with certain limitations,” says the statement on the website.

“We already try to be as transparent as legally possible with respect to requests. Whenever we can, we notify users about requests that may affect them personally. If we remove content in search results, we display a message to users.

The numbers we are sharing today take this transparency a step further and reflect the total number of requests we have received broken down by jurisdiction. We are also sharing the number of these content removal requests that we do not comply with, and while we cannot yet provide more detail about our compliance with user data requests in a useful way, we intend to do so in the future,” said David Drummond, Google’s Chief Legal Officer, in the blog post announcing the tool.

According to the numbers, Brazil, the United States and the United Kingdom top the list of countries who made the biggest number of data requests – 3663, 3580 and 1166 times respectively. As far as removal requests are concerned, Brazil is again at the top with 291 requests, followed by Germany with 188 and India with 142. The United States occupy the 4th place with 123 requests. It’s also interesting to note that there is no result for China – just a question mark instead of a number. I’m guessing that’s because of the Great Firewall?

There is also no visible number of China’s (and other countries’) requests for user data. According to Wired, that’s because Google doesn’t report data when countries has less than 30 requests in six months, because it might jeopardize ongoing investigations.

It’s important to note that these numbers refer only to requests tied with criminal investigations – warrants tied with national security are usually forbidden to be disclosed.

“We hope this tool will shine some light on the scale and scope of government requests for censorship and data around the globe. We also hope that this is just the first step toward increased transparency about these actions across the technology and communications industries,” says Drummond.