A malicious spam email campaign has been targeting iPad users who own PCs, says Bitdefender. The message is the following: 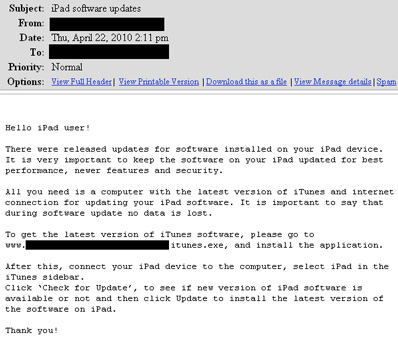 If they choose to download the offered “update”, their PCs will be infected with malicious code that “injects itself in to the explorer.exe processand opens up a backdoor that allows unauthorized access to and control over the affected system.”

Not content with that, the malware also tries to get keys and serial numbers of the various software installed on the PC, and records the users’ passwords for ICQ, Messenger, POP3 mail accounts, and protected storage.

According to Bitdefender, Mac users are not affected – the target are only PC users.