Wombat Security Technologies announced the release of Anti-Phishing Phyllis, a training game to teach employees and customers how to spot fraudulent emails. 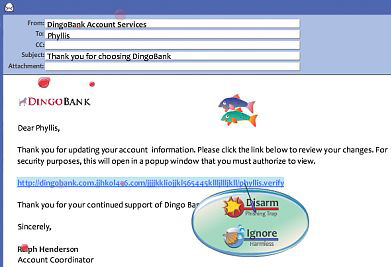 In this training game, users help a fun fish character named Phyllis teach her school of fish how to avoid phishing traps in fraudulent emails. Traps covered in the game include fake links, malicious attachments, cash prizes, “respond-to” emails asking for sensitive information and much more.

Users are given a limited amount of time to analyze each email and spot traps. As they play the game, they are given feedback on the phishing traps they miss and learn to better protect themselves.

The game comes with an extensive collection of randomized legitimate and fraudulent emails, so users can play the game multiple times without seeing the same messages. In just a little over 10 minutes, users proceed through a succession of three rounds, with each round introducing new tips and teaching them how to fend off dangerous email attacks.

Phyllis has been built to support easy deployment and customization. Training emails can also be customized to reflect the types of phishing attacks an organization’s employees or customers are most likely to receive. These emails may pretend to be from the IT department asking for verification of employees’ passwords, a co-worker tempting them to download a picture of an animated singing hamster, or perhaps the IRS asking for their account information to issue a tax refund.