With 63 percent of schools experiencing malware outbreaks or unauthorized user access at least twice a year, the results of a Panda Security survey indicate that IT security is a resource-heavy, time-consuming effort that schools struggle to manage efficiently. 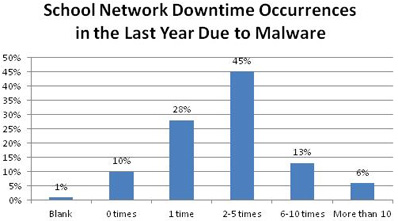 With malware on the rise and new threats propagated through social media every day, having the right security tools in schools has never been more important.

According to the survey, 64 percent of schools have experienced significant downtime, reporting at least two incidents in the last year.

“While the Internet is an invaluable tool for education, it can cause serious interruptions to day-to-day operations if schools fail to properly address security concerns,” said Rick Carlson, president of Panda Security US. “The findings of the Kindergarten-12 Education IT Security Study point to a clear need for a security solution that effectively balances cost, time management and superior protection.” 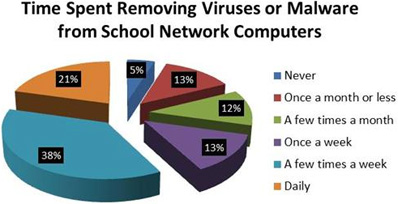 Security issues consume staff time, diverting attention from the business of education. IT administrative staff at 38 percent of schools report removing viruses or malware from IT systems a few times a week, and 21 percent are doing this daily.

While schools have baseline IT security best practices in place, there is still room for improvement. Ninety percent of schools install anti-virus and/or anti-malware on computers, but nearly 25 percent fail to use firewalls, block high-risk websites, or employ user authentication.