In the last couple of days, Twitter users have been inundated with a variety of scams.

They are likely the direct consequence of the recent phishing attempts posing as fake Twitter notifications and account maintenance messages, and messages asking users it they are the person that appears in a video/picture/image that they can access only by entering their Twitter credentials.

Armed with the passwords that allowed them to misuse a great number of accounts, the scammers are posting “Work from home” messages as updates and sending them as Direct Messages to other users.

Graham Cluley has investigated some of them and, predictably, they take the victim to fake news stories about how easy is to earn money by working from home.

“The likelihood is, however, that all that will happen is that you end up out of pocket if you invest in the site’s Home Wealth Formula,” he says.

But spammers are not tied exclusively to compromised accounts – they also make new ones, often with a photo of a pretty, scantily clad woman as the user avatar. In the latest scam of this sort, victims are additionally lured in by an offer to receive a free iTunes gift card: 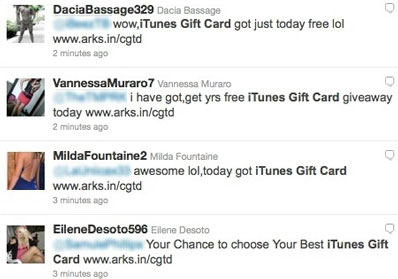 Once the user follows the link, he lands on a website of a premium international dating service that offers free registration – and there’s no more mention of a free gift card.

“It’s unlikely you’re in the market for a Russian bride, but even if you are – I wouldn’t recommend clicking on the links,” warns Cluley. “They could just as easily take you to a webpage containing malware, or a site which attempts to phish your passwords from you.”