Emails posing as scanned documents sent from a Xerox WorkCentre Pro photocopier are again being sent out by malware peddlers, warns Sophos. 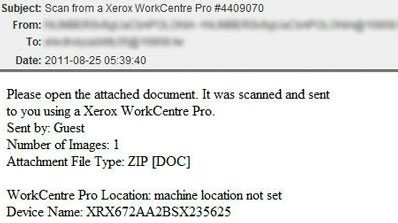 This is not the first time that such emails have been delivered to inboxes around the world.

Back in February, almost identical emails were carrying a booby-trapped PDF file as the attachment, meant to ultimately allow the installation of the information-stealing Zeus Trojan.

This time, the attached ZIP file carries a downloader Trojan.

Sophos doesn’t mention whether the email is sent from legitimate (but compromised) email accounts known to the potential victims. If it does, this spam run might be pretty effective.