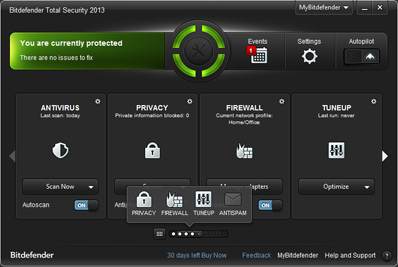 Safepay activates automatically when you access your bank accounts, uses hotspot technology to create an unbreachable connection on public wireless connections, and includes a virtual keyboard so no attacker can read your keystrokes.

Bitdefender Anti-Theft keeps you in control of your device even if it’s been lost or stolen, allowing you to lock, wipe, or even locate from any Internet-connected device.

Bitdefender Safebox allows you to easily store and share files online while protecting it with elite encryption so sophisticated that nobody but you could ever possibly read it.

The Parental Control feature now allows you to remotely monitor your kids’ online activities – even on Facebook, restrict web access to certain hours, and more.

Bitdefender Autopilot silently detects, quarantines and removes malicious software with no user-interferaction or interference necessary, leaving complex remediation to automation. This is particularly important as modern malware is much more complex than the file-deleters of past; they often trigger system actions that can be more detrimental to the computer if the user becomes involved.

USB Immunizer prevents malware from ever leaving an infected external drive or making its way off an infected computer and onto another one.

Bitdefender has also developed a Facebook App that is directly connected to the My Bitdefender dashboard, allowing for visibility into not just malware, but what family members are posting, who they are being approached by, where they are checking-in and more so that malicious people can be detected just as much as bad links.

In addition to all this, Bitdefender 2013 is one of the first major security solutions to support Windows 8 out of the box, providing full functionality straight-away to early adopters of Microsoft’s soon-to-be-launched OS.