Despite repeated warnings about office and home devices being accessible from the Internet when there is no good reason for them to be, every now and then someone gets the idea of using Google Search to sniff out just how many of them are there.

The latest in this line is Adam Howard, a UK-based software engineer who searched for publicly accessible HP printers by using a sequence that matches with an often-used pattern for printing documents on an office or home network: 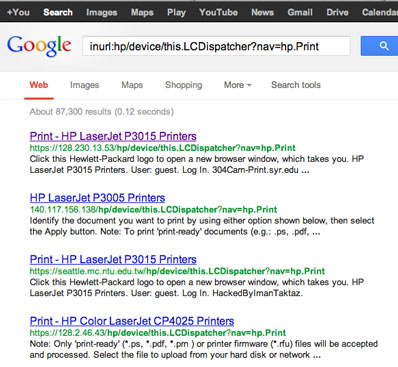 He found “about 86,800 results” four days ago, but as you can see, the number has risen in the meantime.

“There’s something interesting about being able to print to a random location around the world, with no idea of the consequence,” he noted, sharing an easy way to wreak havoc and damage in an office for a while.

But, he also pointed out that there are other security concerns tied with this fact, as many printer models have known exploits which can be used as an entry point to a private network.

Also good to note is that he searched only for HP printers “facing” the Web, so there are probably many, many more of printers by other makers doing the same.

Sophos’ Paul Ducklin agrees with Howard’s advice: “Lock down your printers. Firstly, there’s a security risk implicit in letting untrusted outsiders connect to internal devices. Printers these days have their own OS, network stack and often rather powerful firmware. A lot could go wrong.”

“Secondly, it’s resource mismanagement, plain and simple. You don’t let outsiders randomly and remotely turn on taps in the bathroom to waste water they can’t even see, let alone wash with. So why let them send print jobs they’ll never read or even collect?”