As expected, the Boston Marathon bombings have become an effective lure in the hands of cyber scammers and malware peddlers.

Kaspersky Lab researchers are warning about spam emails offering nothing more than a simple link to a web page that contains URLs of non-malicious YouTube videos about the attacks.

Unfortunately, after 60 seconds, another link is activated, and this one leads to a malicious executable: 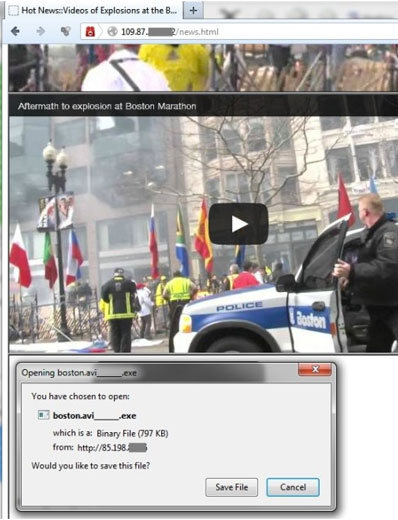 The file offered for download is a variant of the Tepfer info-stealer Trojan, which phones home to a number of IP addresses in Ukraine, Argentina and Taiwan.

Trend Micro warns about a similar attack that leads victims to download a variant of the Kelihos worm and be ultimately saddled with additional information-stealing malware.

In the meantime, John Bambenek over at the Internet Storm Center says that 234 fake and potentially malicious domains have been registered in the hours after the attack.

“Some of these are just parked domains, some are squatters who are keeping the domains from bad people. A couple are soliciting donations (one is soliciting bitcoins, oddly enough). So far, there has been no reports of any spam related to this but there have been a few fake twitter accounts which are fairly quickly getting squashed,” he notes.

He pointed out that so far, most of the domains are inactive, but that doesn’t mean they will not get used in the days to come to scam people.

Be careful when searching for news about the attacks, and don’t follow links or download files delivered via unsolicited emails or messages sent via popular social media sites and IM services. You’re best bet is to check out reputable news sites for information.