The Electronic Frontier Foundation has released its annual report on online service providers’ practices when it comes to protecting users’ privacy and data from government access, and it should not come as a total surprise that Verizon and MySpace are at the bottom of the list.

The companies were evaluated on six criteria: whether the company requires a warrant before handing over the content of user communications, whether they tell users about government data requests, whether they publish transparency reports and law enforcement guidelines, and whether they fight or users’ privacy rights in courts and in Congress.

“These categories are not the only ways that a company can stand up for users, of course, but they are important and publicly verifiable,” says the EFF, adding that they examined each company’s published terms of service, privacy policy, transparency report, and guidelines for law enforcement requests, and that they have taken into consideration their public record of fighting for user privacy in the courts and Congress (via the Digital Due Process coalition).

Verizon and MySpace have, as in the two years before, failed in all the categories. AT&T, Apple again showed no improvement, as the only thing they consistently do is be a member of the aforementioned Digital Due Process coalition. And Yahoo is still just fighting for for users’ privacy rights in court (well, that’s a big plus in my book).

Twitter and Sonic top the list with positive marks in each category, and are followed by Dropbox, Google, LinkedIn and SpiderOak (click on the screenshot to enlarge it): 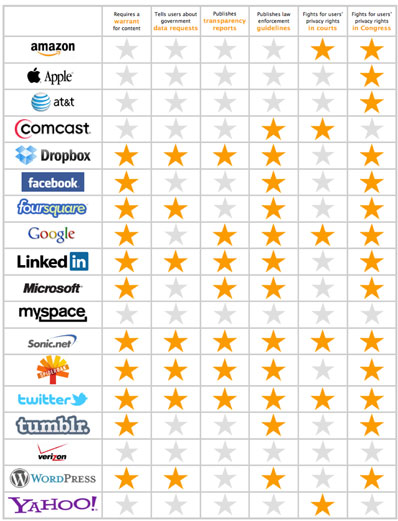 But compared with the results from the previous two years, Microsoft seems to have improved the most, especially because it has started publishing transparency reports and law enforcement guidelines.

“While there remains room for improvement in areas such as the policies of location service providers and cellphone providers like AT&T and Verizon, certain practices — like publishing law enforcement guidelines and regular transparency reports — are becoming standard industry practice for Internet companies,” they noted.

Special mention in the “requiring a warrant for content” category goes to Facebook, for considering semi-public data as well as location data as part of it.

And while Google gets credit for continuing its practice of publishing their transparency reports, their official policy ambiguously says that they “notify users about legal demands when appropriate.”

The “fighting for users’ privacy in court” category is special in that some companies haven’t yet been called to do it, but those who did are duly recognized.

For more details and helpful links to an number of policies, terms of service, statements, reports and guidelines published by the companies, you can download the report here.