After demonstrating a successful GPS spoofing attack against a drone (UAV – unmanned aerial vehicle) last June, Cockrell School of Engineering Assistant Professor Todd Humphreys and his student research team have now proved that a GPS flaw and a few relatively cheap tools can be used to hijacks both ships and planes. 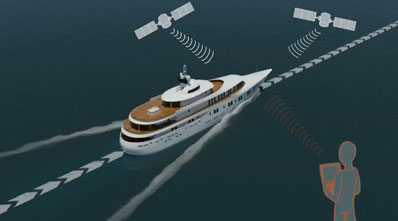 The results of their research was demonstrated aboard the “White Rose of Drachs”, a 210-foot-long, $80 million worth yacht, while cruising in the Mediterranean.

With a laptop, an antenna, and a custom GPS spoofer that cost only $3,000 to build, the team managed to create a false GPS signal that the crew unknowingly accepted as the correct one and used it for navigation, and this resulted in the ship veering way off the original course.

“Professor Humphreys and his team did a number of attacks and basically we on the bridge were absolutely unaware of any difference,” the ship’s captain Andrew Schofield told Fox News, adding that also no alarm systems were triggered during the demonstration. (You can check out the video here.)

With 90 percent of the world’s cargo going across the seas, the implications of their research are huge. Attackers can run ships aground, or make two ships collide, or even shut down a port – all with disastrous consequences.

Humphreys also noted that with the extreme similarities between the navigation systems of ships and that of commercial aircraft, the same type of attack can be mounted against them.

When compared to last year’s research of similar attacks that can be directed against drones, this latest one is more complex and sophisticated. “Before we couldn’t control the UAV. We could only push it off course. This time my students have designed a closed loop controller such that they can dictate the heading of this vessel even when the vessel wants to go a different direction,” Humphreys says.

Whether he will be once again called to testify before the US Congress about his research remains to be seen. His drone-hijacking attacks have so far garnered more attention from both the US political establishment and the nation’s Army forces that this latest one, so for the time being he’s trying to spread this information far and wide, and to make the world know that this type of attack is easy and cheap to execute.

In the meantime, The Economist has published a timely and interesting piece about GPS jamming, which supports Humphreys’ claims about how simple and trivial is to disrupt the workings of satellite positioning systems.