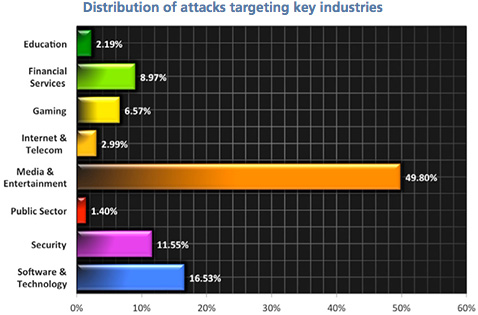 “Instead of using a network of zombie computers, the newer DDoS toolkits abuse Internet protocols that are available on open or vulnerable servers and devices. We believe this approach can lead to the Internet becoming a ready-to-use botnet for malicious actors,” according to Stuart Scholly, senior VP and general manager of Security at Akamai.

The most abused protocols are Character Generator (CHARGEN), Network Time Protocol (NTP) and Domain Name System (DNS). These protocols, which are all based on the User Datagram Protocol (UDP), may be favored as they allow attackers to hide their identity. In addition, amplification-based attacks can deliver a massive flood of data at the target while requiring only a relatively small output from the source.

This quarter saw more than half of the DDoS attack traffic aimed at the Media and Entertainment industry. This one industry was targeted by 54 percent of the malicious packets mitigated by Prolexic during active DDoS attacks in Q1.

Innovation in the DDoS marketplace has given rise to tools that can create greater damage with fewer resources. Q1’s high-volume, infrastructure-based attacks were made possible by the availability of easy-to-use DDoS tools from the DDoS-as-a-service marketplace. These tools are designed by malicious hackers to deliver greater power and convenience into the hands of less skillful attackers.

For example, in Q1, NTP reflection attacks surged, likely due to the availability of easy-to-use DDoS attack tools that support this reflection technique. The NTP flood method went from accounting for less than 1 percent of all attacks in the prior quarter to reaching nearly the same popularity as SYN flood attacks, a perennial favorite among DDoS attackers. Neither CHARGEN nor NTP attack vectors were detected in Q1 2013 but accounted for 23 percent of all infrastructure attacks mitigated by Prolexic in Q1 2014.