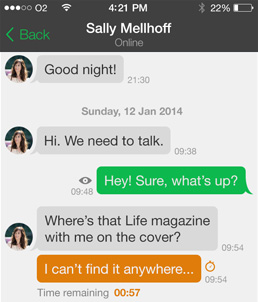 Unlike other standards such as RSA, the McEliece system has never been broken; even using techniques designed for the new era of quantum computing. PQChat allows users to share and delete encrypted messages, voice, video and images as they desire, while the application itself holds no personal information on users. As a result, users can have the utmost confidence that their private communications remain just that.

Current encryption tools are facing a major threat from the ongoing evolution of quantum computing, which will make breaking even highly sophisticated algorithms simple and immediate. Most of the existing encryption standards have already been broken in theory, with only the IT horsepower needed to actually run these processes preventing widespread attacks. Quantum computing provides all the horsepower such techniques need, meaning that these standards will be wide open.

PQChat is the first product to be based on SRD’s own patented NTS encryption. It can be used for authentication, banking tokens and digital rights management; as well as becoming a new encryption standard replacing RSA and Elliptic Curve. To avoid any possible attacker detecting patterns in a user’s messages, NTS randomizes messages’ appearance. Regardless of content, every time you encrypt the same message the output will be completely different: making messages incomprehensible to everyone except the intended recipient. As a result, PQChat is as future-proof as possible.

Minimal user information: Most communication tools require users to share a large amount of personal information. PQChat only stores a one-way encrypted value of the user’s phone number, which cannot be reconstructed, plus an encrypted user-supplied nickname and pseudo ID image; making the user’s identity impossible to determine.

User-defined passwords: PQChat allows users to set their own Master Password to sign up to the service, as well as a 5-digit alphanumeric PIN. PQChat does not even store the Master Password in the app, meaning that users have complete control over their own security.

Video and Voice authentication: To ensure a message recipient is who they claim to be, PQChat uses SRD’s patented Man At The End (MATE) authentication. By providing a video and audio authentication message, users can be certain of each others’ identity.

Locker: To guarantee that important information isn’t lost, PQChat includes a secure locker where users can store information that they want to guarantee it is kept safe and private.

Complete control over messages: As well as sending, users can remotely delete messages, whether manually or after a particular length of time. Users can also be sent an acknowledgement to provide a guarantee that crucial messages have been seen and read.