A survey commissioned by Intel Security and conducted by Evalueserve, in conjunction with the report, suggests that a majority of companies lack confidence in their ability to detect targeted attacks in a timely manner. 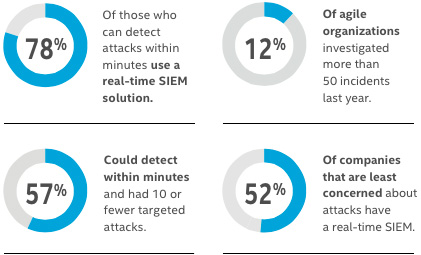 Even companies best prepared to handle targeted attacks are taking the time to investigate high volumes of events, contributing to a sense of urgency and organizational focus on creative approaches to earlier detection and more effective mitigation.

“You only gain the upper-hand versus attackers when you address the time-to-discovery challenge,” said Ryan Allphin, Senior Vice President and General Manager, Security Management at Intel Security. “Simplify the frantic work of filtering an ocean of alerts and indicators with real-time intelligence and analysis, and you can quickly gain a deeper understanding of relevant events and take action to contain and deflect attacks faster.”

Given the importance of identifying critical indicators, the report revealed the top eight most common attack activities that successful organizations track to detect and deflect targeted attacks. Of these, five reflected tracking events across elapsed time, showing the importance of contextual correlation:

3. Publically accessible or demilitarized zone (DMZ) hosts communicating to internal hosts. This allows leapfrogging from the outside to the inside and back, permitting data exfiltration and remote access to assets. It neutralizes the value of the DMZ.

4. Off-hour malware detection. Alerts that occur outside standard business operating hours (at night or on weekends) could signal a compromised host.

5. Network scans by internal hosts communicating with multiple hosts in a short time frame, which could reveal an attacker moving laterally within the network. Perimeter network defenses, such as firewall and IPS, are seldom configured to monitor traffic on the internal network (but could be).

6. Multiple alarm events from a single host or duplicate events across multiple machines in the same subnet over a 24-hour period, such as repeated authentication failures.

7. After being cleaned, a system is re-infected with malware within five minutes—repeated reinfections signal the presence of a rootkit or persistent compromise.

8. A user account trying to login to multiple resources within a few minutes from/to different regions—a sign that the user’s credentials have been stolen or that a user is up to mischief.

“We noticed a workstation making odd authentication requests to the domain controller at two o’clock in the morning. That could be normal activity, but it could also be a sign of something malicious,” said Lance Wright, Senior Manager of Information Security and Compliance at Volusion, a commerce solutions provider contributing to the report. “After that incident we set up a rule to alert us if any workstation has more than five authentication requests during non-business hours to help us identify the attack early, before any data is compromised.”

“Real-time, intelligence-aware, SIEM technologies minimize time to detection to proactively prevent breaches based on contextualization of indicators during analysis and automated policy-driven responses,” said Allphin. “With the power to accelerate their ability to detect, respond to, and learn from events, organizations can dramatically shift their security posture from that of the hunted, to the hunter.”