BitTorrent, the company responsible for the development of the BitTorrent peer-to-peer protocol as well as that of μTorrent, a widely used torrent client, has been criticized for bundling the popular with cryptocurrency mining software.

According to users on μTorrent forum, the latest release of the client also installs the Epic Scale cryptocurrency miner without asking users for permission or warning them about it.

BitTorrent is known for offering additional software installations while users are installing the company’s programs, and says it’s not true that they don’t ask users to approve the download and installation of the miner.

Despite some users saying that they are very carefull when installing freeware because it often comes with “foistware,” Epic Scale claims that they have confirmed with BitTorrent that their offer is always offered “on a 100% opt-in basis.”

Looking at the screen of the offer made during the μTorrent installation, that seems to be true (click on the screenshot to enlarge it): 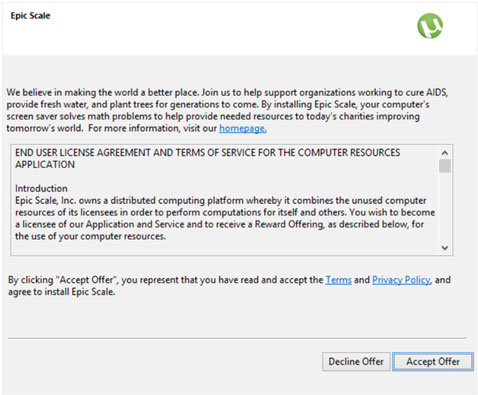 Nevertheless, we all known that many users go with the installation flow, and in this case the option to choose Epic Scale’s installation is the default one.

“Epic Scale uses your computer’s idle time to do genomics research, protein folding, image rendering, cryptocurrency mining, and more, then we give a majority of the profits to charities like Watsi (life-changing surgeries), and Immunity Project (HIV vaccine). We do not spy on your browsing behavior or scan your files,” the company explains in a FAQ, adding that the software only runs the calculation if the battery is full and the computer is plugged into the electrical grid.

But to placate disgruntled μTorrent users, the company has created and prominently displayed a how-to guide for uninstalling the Litecoin miner, and has said they will be working with BitTorrent to make offer more clear during the μTorrent installation process.

Epic Scale is not the only software that BitTorrent offers along with their offerings. They also occasionally offer more than just software. The latest example of this is the “Five Knives Savages Bundle,” which contains an exclusive track by the band Five Knives, as well as remixes of it.