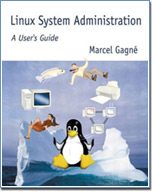 Available for download is chapter 13 entitled “Printers and Printing”.

Confused by the command above? Read on.

System administration is an area everyone has to deal with, at some point of their IT career or in personal affairs. Even the most computer illiterate people do it, aware of it or not. It is a necessity, a must you can say. For who else can be in touch with your desires and needs, and have the access to your system other than yourself? Sure, any trained personnel can, but isn’t it nicer to try and do it yourself first? Even if it doesn’t work, you still gain some useful knowledge about your system.

Now, with linux in question, you are assured that your everyday activities are not to be considered routine or boring, for every day is a new experience. Weather you’re a seasoned administrator, a beginner, or just being plain curious about system administration, it is always nice to have some documentation lying around, just waiting to be picked up. Sure, I already hear somebody saying: ‘why bother? everything is available on-line.’ Well, for newbies in system administration, it’s sometimes hard to orientate in the wast oceans of documentations, how-to’s, manual pages and other forms of knowledge available at any time. And for any seasoned admin, it’s pretty much handy to have useful data gathered in one place, not to mention a welcome refresher for those brain cells filled with so much information one could get lost in. This is the situation books when come into the spotlight.

And, finally, one might wonder why am I writing so much about system administration, when there’s a new book out, written by Marcel Gagne, and published by Addison Wesley, boasting a 500+ pages of pure knowledge related with system administration. So, lets discuss that instead, for it is an interesting subject indeed.

Enter the bowels of the penguin…

Linux system administration – a user’s guide being the full title of this book, is written by Marcel Gagne, as the notes say, president of Salmar Consulting, Inc., a long time system adminstrator, not only interested in system administration but also a science fiction author. This fact alone should guarantee that the book itself is not just your usual collection of techno babble, but filled with, somewhat odd, but still funny humor. Sure, some may not comprehense it entirely, but most should find amusing. For instance, who could argue the contemporary bit like ‘Will the Real DNS Please Stand Up’ as one of the titles in Chaper 18? Yep, and Eminem is most certainly going to read this book. So, the book has a nifty line of humor to follow throughout it, some may even consider the title to be quite a paradox…

Now that we have cleared that, lets focus on the real thing, the book’s contents.

The book consists of 26, easy to follow chapters. From the very first chapter, Introduction, to the last, 26th, Performance Monitoring and Tuning, the reader is guided through the ever expanding world of Linux, and system administration. It is written in a quite clear fashion, so no misunderstandings or even worse, no ‘mystical’ explanations exist in it. What could be worse than a book filled with foggy explanations of this and that? This book is, as expected, quite opposite. But, let me fill you with some tehnical tidbits concerning it, and by the time we reach the end of this review, you’ll be able to make some conclusions about the book yourself.

The author does not waste too much time in bringing the reader up to speed with Linux history, and some typical Unix vs Linux debates. You’re introduced to a couple of most popular distributions as well as to some rather useful short information for newbies, such as their installation procedures. This is very useful as the installation itself is usually the stepping stone for many newbies.

As you get further into the book, standard topics for anyone starting with Linux are covered, from a typical installation through commonly used Linux commands, together with practical examples. The author succeeds in that without getting the reader lost in the definitions, finalizing the book with instructions how to set your office jobs with Linux and integration with Windows. Most of the subjects covered also contain little warnings, quick tips or plain facts, not in direct correlation to put it the main text, but interesting. Another fine example of how to make the book interesting.

Not only that the book covers a vast array of topics, but the author has also done an extra effort to include two ‘proof of concept’ chapters in which he explains on examples how to set up an effective office intranet and a web server. What more can you ask for, when it is so time saving to have that all in one place, rather than looking around for it. And, this wouldn’t be a complete book on Linux administration when it wouldn’t contain references and additonal resources located on the web at the end of each chapter. It’s a newbie paradise.

But, you’d be wrong to think it is only focused on newbie readers. It is not so often that a newbie is promptly faced with the task of manually creating devices, but any seasoned admin is. And this book also covers the more intermediate subjects, such as device definitions, scripting, network administration including the quick introduction course of TCP/IP, through setting up your own name server. And last but definitely not the least, it has two chapter directly dedicated to system security, an area most often neglected when writing a book such as this. Although an entire collection of books can be written on that subject, it is nice to see some facts and references stated, if nothing else than at least to take the veil of mystery off from it.

By now you’re probably thinking “what’s wrong with this guy”? Carry on…

First, I’d like to deal with an issue I can’t let go. Tastes may vary, and they most certainly do, as speaking for myself, this is one book you do NOT want to judge by its cover. The cover art features a penguin juggling with a network, a personal computer, a fish, a woman and a man, in front of icebergs and I find it very disappointing. Don’t know, just doesn’t seem to do the book justice. Than again, tastes vary from one person to another…

As with many books on system administration this one has many ups, and downs. It does its best to cover all possible topics any administrator could come across, and it does that very well. Lets think about it, this book has so many topics covered, that each chapter could be a book on its own, so it is quite hard to put all that knowledge in one book. This one succeds in doing that, providing the newcomers with all the necessary details to start with, and it provides even more, serving as a reference guide on how and with which tools do achieve tasks. On the other hand, any veteran administrator can use such book as a reference guide, or a small reminder for all those tasks not performed for a long time. As a person who is into Linux for some time now, I can honestly tell you that this book has a lot to offer. Sure, it could offer even more, but then you’d have to rent a truck to go and pick it up at the bookstore, as the size would demand it. Still, I wouldn’t go as far as saying it’s the stuff that dreams are made of, but it comes quite close for anyone interested in this subject.

To summ it up: a fine book on system administration, with more information than you’ll likely ever need, serves also as a great pointer and reference guide. However, don’t expect that it will guide you by your hand for every single problem you may encounter. No such book exists. But, it will provide you with some clues on what to do. Fair enough.

And, last but not the least, at the beginning I asked you if you were confused with the command at the top. Well, you guessed it, all necessary answers can be found in the book, to be even more precise, the cat command you’ll find at page 45, and info about the /proc pseudo filesystem on page 117. And, some might say finally, it’s time for: