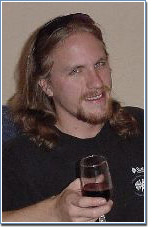 Jeremy Anderson teaches UNIX classes at Hennepin Technical College. He has expertise in UNIX, Linux, Perl, C/C++, and Java programming. Jeremy is also one of the authors of Multitool Linux. Jeremy says: “While I teach Linux classes (Unix is the name, Linux is the content) at HTC, I try not to let the rest of my life revolve around computers. I enjoy a variety of hobbies, including reading, bicycling, motorcycling, arguing politics, and most importantly spending time with my wife of seven years. Years back, I used to have fun trolling for kooks on usenet, but that lost its appeal some time ago.” You can find more about Jeremy if you visit his homepage.

How long have you been working with Linux, and how did you get interested in it?

I first got turned onto Linux relatively late–in 1997 or so. I’d already heard of it long beforehand, but was a big commercial *nix proponent. While working at an ill-fated startup as a field engineer, one of the other employees kept nagging me to install Linux. He loaned me Slackware, I couldn’t get it installed properly, and I eventually turned to turbolinux. Within six months, I wasn’t using Windows for much of anything but games anymore.

How long did it take you to write Multitool Linux and what was it like?

We worked on it from the fall of 2000 until April of 2k2. It feels like two years, but really, about 18 months. Since there were several authors, it was a stop-and-go process. That is to say, one of us would crank out a couple of chapters relatively quickly, then pause a bit, and another would crank out a couple of chapters. All of the authors are pretty hobby-heavy guys, so we had plenty of extraneous distractions as well. Overall, it wasn’t a bad thing that it took that amount of time–much of the software matured as we were writing (I found KDE1 to be absolutely horrendous, for example, though my co-authors disagreed). Like a fine cheese or wine, I believe the aging did the book good. Though, I’m a little disappointed that I didn’t get all the netfilter/iptables stuff into the book. Perhaps in Son of MultiTool Linux, we’ll cover the new firewalling code…

In your opinion, where does Linux need the most software development at the moment?

Games and user-interface. Standardization. I really like Redhat’s move to make KDE and Gnome look the same. Regardless of how much us hacker-types like customization and different looks, that isn’t something that appeals to the general public. Look at the near-pathological following that Macintosh has–it’s all because of the standard interface to applications. If you can use one Mac app, you can essentially use them all. I hate to say it, but Linux is often worse than even Windows for UI. Different apps have differently styled menubars and icons. It’s been quite a while since I played with Gnome, but the last time I did, I felt like a fish out of water. This isn’t because Gnome is inferior. It’s because I’m more used to using KDE. And truth be told, I only use that at work. At home, I’m a strict Blackbox kind of guy (and I’m starting to play with fluxbox, as well).

And games. Definitely games. We need everyone who likes Linux to buy a subscription to Transgaming.com. If Linux is going to beat MS Windows (and who doesn’t want that?), we need to have total DirectX compatibility. The guys at Transgaming are making great strides, but they need funding. $5 a month isn’t too much to ask, is it? They may not be GPLd, but perhaps if enough people subscribed and requested it, they’d change.

What advice do you have for people that are considering switching to Linux?

Do it. It’s not going to be like Windows. It’s going to be a bit of a transition for you, but learning anything new is. Make a list of what apps you _absolutely need_. Search freshmeat and sourceforge for apps that do similar things. Let’s say you’re a big warez junkie, and you need a multi-threaded binary newsreader. They exist for Linux. But frankly, who needs warez on Linux? Everything good is either GPLd or BSDd. If you find some category of application that you absolutely can’t find for Linux, go to a dual-boot system. After a few months of *nix stability, you’ll never want to go back to Windoze. Oh, and check out the local LUGs. Don’t be afraid to take a class at a local technical college–they’re usually very good, and quite inexpensive.

What are your plans for the future? Any exciting new projects?

I’m thinking about writing my own textbooks, and I’ve got an idea for a book up my sleeve which I haven’t even pitched to my friends yet. And the usual stuff, like World Domination by ’05.

What is your vision for Linux in the future?

Linux is going to win not only the desktop war, but the server war. I think proprietary OSes are going to be pushed further and further into niches, until eventually they’re extinct. Eventually, Linux systems will be as ubiquitous as the semi-conductor and the binary computer. I don’t think non-free software is going to go away, but I think it’ll decrease in importance as more and more companies produce GPLd and BSDd products. Bill Gates would be smart to liquidate more of his MS stock. It’s not going to be worth anything in twenty-five years.