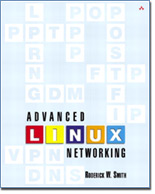 So, you found yourself somehow stranded in the ever-expanding Linux universe. Stranded? No, that would be untrue, as it would symbolise you being lost and helpless out there, all alone, with no one to help you. Eee! Wrong, all wrong. You’ve read Marcel Gagne’s excellent book Linux system administration – A user’s guide and even Multitool Linux – Practical Uses for Open Source Software and still feel a bit clueless? Lack of appropriate knowledge? You’d perhaps like to try and setup your own SOHO Linux intranet, or even go into the world of web presence providing? If any of these answers are positive, well, I have good news for you. A new book is available, and if you read on, you’ll find out more. What’s it about? Advanced Linux Networking.

Roderick W. Smith is a professional computer book author who has extensive experience writing handbooks for users. A Linux and networking expert, he has several books to his name. Roderick has a Ph.D. in Cognitive Psychology from Tufts University.

An interview with Roderick Smith, is available here.

Advanced Linux Networking consists of five parts, organized into smaller chapters, creating a 26 chapter book which is an excellent reading companion to any basic Linux system administration book. Specifically, Caldera, Debian, Mandrake, Slackware, SuSE and Turbolinux distributions are covered to some extent, so you’ll be aware of their major differences, and what sets one apart in some areas.

The first part of the book, as its name implies, deals with low-level network configuration. It includes topics such as kernel network configuration, and some specs about it usually not found in your basic Linux administration book. There’s no doubt you’ll find it interesting enough to follow through to TCP/IP configuration, as well as alternative network stacks, including NetBEUI, appletalk and IPX/SPX. One chapter deals with starting servers, and methods of doing it, as a stand-alone, or through a super-server. Inetd, xinetd, SysV scripts, all there. If you have just started with Linux, and know your way around the system, this is an excellent chapter to get yourself a bit more acquainted with the core of the system and how it handles various servers.

The second part is mainly dedicated to various local network servers. Things such as DHCP, kerberos, Samba, NFS, LPD, pull mail protocols, backups et al, things needed when designing and running a server in a LAN environment, whether it may be a SOHO LAN to large scale production intranets. There are many ways of integrating Linux into business environments, and this part of the book does it justice by explaining and leading you more into the world of Linux based LAN.

But, not to be mistaken, not only Linux based LAN, but any heterogeneous LAN comprising of many different OS flavours, such as Windows or Mac OS. If you’re not familiar with Linux too much, this is also a good part of the book to see for yourself how your organization can benefit from using Linux, and (mainly) free software and how to utilize it’s powerful and scalable networking capabilities.

Ah, the goodies. The third part of the book deals with internet servers per se, things non technical users take for granted, but you, the experienced user know how to be grateful for. This part will lead you into the wonderful world of web based services, e-mail, FTP, and most importantly web servers. You’ll start with the DNS server, slide across SMTP and hit the icing on the cake, web servers, from the basics up. Of course, a lot more can be said on this subject, but never the less, an excellent start if I may say so. The author mentions the kHTTPd, a kernel land based http daemon, and how it can be configured for use. I’d like to add to this part, from a personal point of view, is that it’s not too useful to use both kHTTPd and a normal HTTPd (ie. Apache) on a same machine, but separated machines running one each, one for handling dynamic content, the other for static, thus utilizing them best. But, these are minor details, you’re always supposed to get yourself more acquainted with web and other servers than just relying on one chapter of any book dedicated to it. You’ll have to, in order to optimise your production server to operate in a best possible way.

The fourth part of the book goes a bit into network security and various router functions. If you’ve heard of chroot jail and are not to familiar with the term, look no further than here. Iptables? VPN? All there. Mind you, when dealing with security, there can be never enough reading and materials to read, so be sure that this serves as a mere appetizer for you.

Well, first things first. This book is designed for people with some basic networking and Linux system administration knowledge. Sure, you’ll get a grip with it even without those, but in order to understand it best, it’s advisable that you first do your homework. For those of you already acquainted with Linux and networking, you should find no problems whatsoever with following the chapters and understanding the book. However, it also tries to cover some topics that are neglected in entry level Linux books, so you may find out some things you missed earlier.

It’s downsides? None I can think of, but as usual, I’d like it to be even bigger and to cover more in depth details than it does. So far, none of the books I encountered did, so one might say it’s nearly an impossible task to achieve and to keep the book easy, not to read, but to hold. 🙂

It succeeds to cover, explain and help you get most out of your server, mostly on all chapters and subjects it covers, and elevate your level of Linux networking on a higher level of expertise. For certain in-depth information, you’ll have to do some finding out on your own, but that is not a problem, nor is anything out of the ordinary. As it says on the cover of the book, ‘a single volume tutorial and reference for Linux networking’. As a book that reads easily and is very clear, it gets two thumbs up.

Well, not much more needs to be said here, an excellent Linux networking book is made available, the rest is now up to you. My recommendation to you is to go out and get it.