As we were working in the press room today, a journalist from Euro News approached the PR people and asked if there is a hacker they could interview. The PR person approached Berislav and asked him if he’s a hacker and if he wants to be interviewed. The reason why he approached him was the way he was dressed: 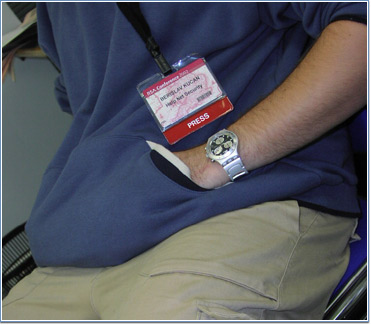 We’re different from the IT consultants present at the conference because we’re dressed casually and not in expensive suits.

That apparently means we’re malicious hackers or something. Yeah, and don’t forget that hackers also wear latex in the evening and roller-blade while coding on an iPaq… I wish that only for once the TV would send competent people to a computer security conference.

Furthermore, the journalist was asking around if anyone knew any: “…hacker websites, you know – something dark with skulls or something”. This is another example of how the media portrays the hacker community and makes no differentiation between hackers and crackers. What does he mean with the skulls anyway?

On the photo below you can see the place where they were filming the news story, the gentlemen from Euro News is the one with his back turned to the camera. 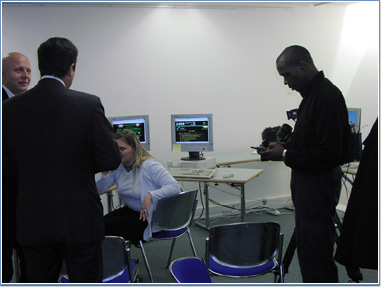 I don’t want to get into a debate on the terms “hacker” and “cracker” but a year ago some media outlets started using the terms like “cracker” or “malicious hacker” to indicate some negative activity while now that seems to be completely forgotten. The term “hacker” is used ONLY to portray something negative. Even the term “script kiddie” is nowhere to be heard at the RSA Conference.

It became a marketing tool to spread fear and make the end user look at he Internet like a dark place. “You better protect yourself or you might suffer serious consequences because of hackers” – this is the broadcasted message. It seems that people actually think that there are people with nothing better to do than just destroy computer systems all day. And, of course, there is a magical way in which they can take over any system anywhere in under 2 seconds. Groovy!

Why is the Internet in the first place always portrayed as a place where you can get a virus infection instead of finding knowledge?

I took me a lot of time to explain to my parents that nothing evil will happen to them if they use the net, no hacker is going to get into their e-mail account just because they turned on their workstation.

But they are scared, everyone is.

It’s always those pesky hackers. For all you journalists out there, take some more notes now: hackers always have long hair and dress in black and live somewhere underground where there’s no sunlight. They are an elite force of dark lords that will take over your children and make them do illegal stuff.

Later on, another journalist was speaking for Euro News and describing various activities in which hackers are involved. Now you’ll realize how far the misuse of the term has gone. And we are at the RSA Conference, hello??

According to him the activities of hackers include:

Is there a way to save the term or is the debate finally over? Maybe the best thing would be to open a poll and find a new term to describe what “hacker” used to mean. All I can do is to point you to a good paper – How To Become A Hacker. Also, you might want to take a look at some definitions of the term hacker.