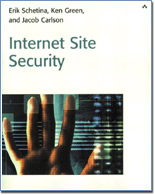 Internet Site Security – what a name for a book. When I first heard about it I was thinking: “1400 pages, 6 CDs”, but when the book came and I began to read through it, I realized how much good information the authors were able to fit into just over 400 pages. We all want “big books” but when it comes to this one, the approach the authors take is somewhat different, one that is less connected to software versions and that will endure in time. But, before we get into the core of the book, let’s take a look at the people behind it.

Erik Schetina, CISSP, is the CTO for TrustWave Corporation. He spent 14 years with the U.S. Department of Defense developing information security systems and public key cryptosystems.

Jacob Carlson is a senior security engineer for TrustWave Corporation. His primary role is leading the penetration testing and vulnerability assessment team. In his copious free time he likes breaking things and writing code.

An interview with Jacob Carlson, is available here.

When you read biographies like the ones above you can be somehow reassured that the content of the book is good. All of the authors come from TrustWave Corporation and the fact that they work together has influenced the writing of this book, in a very good way.

At the very beginning of the book the authors show us that the starting point of building a secure environment is not the implementation of a solution but rather the defining of the assets we want to protect. You have to know what’s a threat to your assets in order to choose the best security solution.

The authors manage to successfully illustrate how different things such as system administration, policy and audit, fit into an overall security plan. Through the book, the authors educate the reader by making sure he sees “the big picture”. The bottom line is that “the transition from a techie to a security professional consists in the recognizing the importance of all the components of security”. In the second chapter some great material is covered: description of the security process, assessment and policy, asset protection, monitoring and detection.

Which one is better?

When describing the way things can be done, the authors always give you the prons and the cons. For example, at one point they describe the difference when using commerical scanners in penetration testing or using a team of people that will do it by hand. They provide good pros and cons for both ways and that’s one of the great things about this book, you always get to look at the other side of the coin.

What we all know is that the Internet is inherently insecure, that’s why this book was published in the first place. The authors explain why it’s insecure, who administers it and how it works. Some of the topics presented here are: an overview of TCP/IP, the Domain Name Service (DNS), Whois databases, anonymity, and much more.

History is also present in this book. Chapter 4 begins with a brief overview of the history of the Internet and the TCP/IP protocol suite. Also mentioned is the Morris Worm (November 1988). As we move on, the DNS is explained in greater detail with some security issues and we are slowly presented with an abundance of technical details that stretches over several chapters. Some of the things that are explained in the book include: secure protocols, virtual private network protocols and encapsulation, the secure shell (SSH) and authentication systems.

As an inevitable part of a book of this kind, there’s a part dedicated to passwords (and good rules for their generation) and one for digital certificates. The authors present the shortcomings of certificates and their uses. Although all of these things are not explained in great detail you’ll be able to get an overview of the things presented.

The book also gives some good information when it comes to operating systems and server software. Some of the covered topics include:

If you want information about attacks, Denial of Service is covered in great detail along with many other attack scenarios. Since you also want to protect yourself from all of these attacks there’s naturally much material dedicated to firewalls, their functions, implementation issues and vulnerabilities. Now that’s not enough is it? Now you want more. Well you got it, there’s a whole chapter dedicated to intrusion detection systems and one dedicated to incident response and forensics. The chapter on incident response and forensics will be of particular interest for all of you that want more knowledge on legal and privacy issues.

To complete the book, there’s a chapter dedicated to the developers since it discusses the development of secure Internet applications. Here you’ll be able to read about common sources of programming mistakes, exploiting executable code, application-level security, coding standards, and more.

This book manages to shade a new light on the problems of security implementation by explaining the position of the system administrator and the position of the IT manager in order to make them both understand their role in the overall process of security in the company. It’s a good idea to give it to both your IT manager and your system administrator, they will both learn from it and in the process start to understand each other on a new level. What you basically get with this book is that you learn to think on a larger scale.

There are not many downsides. There are basically only two things that I didn’t like about this book: the lack of resources and some of the writing style. There are not enough resources listed and I always like to get to more information. As regards the writing style it’s obvious that this book was not meant to entertain in any way but it sometimes seems a bit too serious. I always believed that learning should be fun. That’s just me 🙂

Overall, this is an excellent book, two thumbs up!