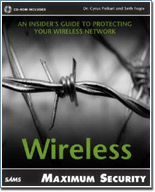 Wireless networks are replacing wired networks very rapidly. More and more people want to stay connected on the road. What this transition brings is – more security problems. While wired networks have been around for ages and have had the time to make good security defences, wireless networks and new in comparison and still have a long way to go. This book aims to give you the knowledge you need to bring maximum security to your network, by teaching you how that security can and will be broken.

Dr. Cyrus Peikari worked as a telecommunications software research and development engineer for Alcatel. He has developed several award-winning security software programs. He co-founded DallasCon, the largest annual wireless security conference in the Southwest and has spoken at Defcon, the annual hacker security conference in Las Vegas.

An interview with Cyrus Peikari is available here.

Seth Fogie is a former United States Navy nuclear engineer. After retiring from the Navy, Mr. Fogie worked as a technical support specialist for a major Internet service provider, during which time he earned his MCSE. Currently, Mr. Fogie is director of engineering at VirusMD Wireless Security, where he develops next-generation mobile security software.

The book begins with an examination of wireless hardware. According to the authors, we are presented with only the very best hardware that offers the highest cost/value ratio. The types of hardware presented are access points, antennas, wireless network interface cards and handheld devices. This can serve both as a good buying guide if you haven’t decided on what type of hardware you want to purchase and as an introduction to what hardware is available and how it works.

Moving on we receive the basics of what we have to know if we want to understand wireless networks – an overview of the various wireless network protocols. You’ll learn about the 802.11, 802.11a and 802.11g standards, IrDA, Bluetooth and HomeRF. There’s also a comparison between the 802.11a and 802.11b standards. To aid in the understanding of the theory presented here there are a few diagrams that will make your life easier.

Even though wireless communication may seem simple, wireless programming can be complex. That’s exactly why the authors analyse several types of programming and formatting found in handheld wireless devices. The presented material includes: HTML/XML/XHTML, WAP/WML/WMLScript, .NET, Java (J2ME), i-mode and Openwave SDK. If you’re interested in the basics of wireless programming this is a good place to look. Besides the theory you’ll see some screenshots and code examples. I have to emphasize that this is an introductory text that will not give you much to learn from if you want some hardcore wireless programming information.

The IEEE 802.11 standard offers a method of protection known as the Wired Equivalency Privacy (WEP) protocol. WEP defines a set of instructions and rules by which wireless data can be transmitted over the airwaves with at least some security. Several security vulnerabilities have been discovered in WEP and here you’ll learn about them.

Now that you know about the vulnerabilities we get some juicy material, the authors present how to crack WEP. What you see here is a technical explanation that will get you wondering the next time you rely solely on WEP to secure your wireless network. To continue in the vein of good material we are presented with “Hacking Techniques” where the authors dwell into several attack methods including social engineering and social spying, explain sniffing and session hijacking in more detail. When it comes to a more advanced attack technique, you will learn to understand buffer overflows and there’s also the very (un)popular Denial of Service attack.

As I began reading the chapter entitled “Wireless Attacks”, I realised that things are going to get particularly interesting now. Why? The beginning of the chapter welcomes the reader with a disclaimer stating that the information presented here is meant to teach you how to protect your network only and not for any other, possibly illegal, activities. What you’ll learn here is how to efficiently discover a wireless network and attack it. Everything is explained in great detail with a variety of screenshots and photos. Attacks like war driving, client-to-client hacking and jamming are explained.

As regards wireless viruses, the antivirus industry has been predicting the apocalypse for some time now. Although fortunately their dark predictions have not come true yet, airborne viruses are a reality and that’s why they are present in this book. After an overview of viruses and prevention you’ll learn about hostile web pages, viruses for PalmOS, Windows CE .NET and more. Although very brief, this chapter is quite interesting. With time this topic will, for sure, get more exposure.

There are several tools you have to master if you want to become a wireless security expert. For hands-on learning the authors bring us detailed information on how to install and configure various tools. After reading this part of the book you will certainly become proficient in the usage of these tools: Ethereal, Kismet, AirSnort, etc. This is probably the very best part of the book.

If you’re interested in palmtop hacking you’ll get info about it too. As wireless Pocket PC powered devices are becoming cheaper and a larger audience is able to acquire them, the number of war drivers using handheld devices is growing rapidly. There’s an overview of various tools with a myriad of screenshots.

Now that we’ve learned much about wireless hacking techniques, tools and methods, we are presented with a wireless hack walkthrough. The idea is to simulate a real world attack scenario based on a test network built for the occasion. The authors walk us through the process of discovering a wireless network, the preparation of an attack and the execution. After the attack scenario comes the chapter that will teach you how to secure your WLAN. The many available methods that you can use to secure your WLAN are explained in detail. If you’re worried about VPN security there’s also much information on the subject: tunnelling, IPSec, L2TP, and much more. To finish off the book there’s a part dedicated to the wireless public key infrastructure (PKI) in which you’ll find out more about public key cryptography, digital signatures, wireless PKI implementation, and so on.

The CD-ROM is very simple with no flashy graphics. What you get here is a collection of wireless security tools mentioned in the book. This is very useful since you can install the software presented in the book while you’re reading it, and start experimenting. I just wish more books had a CD-ROM, at least with just tools like this one.

What can I say? When you come to the end of the book you’ll be wishing for its size to be at least double. The writing style is very loose and will keep you hooked to the material without giving you too much dry technical information. The variety of examples and screenshots brings the material forward to a wider audience despite the “Intermediate-Advanced” user level noted on the book. Just when you think this is pure gold, you realize there’s a CD-ROM packed with the book that contains the software presented in the book. What more can I ask for?