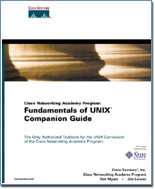 Cisco Press, a collaboration between IT super company Cisco Systems and Pearson Education, offers a nice set of books dedicated to Network Professionals and IT personnel handling with Cisco products. We have reviewed a number of great Cisco Press security titles, including “Cisco Secure Intrusion Detection System” and “Web Security Field Guide”, but this time one non-security related title hit my desk. As mentioned on the book’s front cover, this is the “only authorized textbook for the UNIX curriculum of the Cisco Networking Academy Program”.

Jim Lorenz, CNE, MCT, CCNA, , is a curriculum developer and faculty intern for Cisco Systems in North Carolina and created the Cisco Networking Academy Program Lab Companions for Semesters 1-4. He has over 20 years experience in information systems and has held various IT positions in several Fortune 500 companies, including Allied-Signal, Honeywell, and Motorola. Jim has developed and taught computer and networking courses for both public and private institutions for more than 15 years.

Sun Microsystems is the first outside vendor that joined the famed Cisco Networking Academy Program. They are sponsoring the Fundamentals of UNIX Web-based course which this publication accompanies. Because of this cooperation, the course and the companion guide are mostly connected with Sun’s Solaris Operating System.

The opening chapter presents an overview of the UNIX computing environment as well as an reference guide to main computer components and operating systems. The UNIX operating system was originally developed at AT&T Bell Labs, with some additional involvment from General Electrics and MIT. That development was happening in the mid 1960s and the product was called Multics – Multiplexed Information and Computing Service. In the same time, Ken Thompson, one of the Multics programmers, decided to write a space travel game and this action afterwards resulted in the need for an operating system, which was originally called UNICS – Uniplexed Information and Computing Service. Eventually, the name was changed to UNIX and in 1973 UNIX was re-written in C language (previously it was written in assembly).

I mentioned that the book uses Solaris as an UNIX implementation, so we are presented with a scope on the Solaris Operating Environment and SunOS Operating System. Following the introduction on Solaris, the authors walk the readers through the kernel, the file system, shells and common Solaris directories. Next couple of chapters concentrate on Common Desktop Environment (CDE) and related applications; ways users can connect to the system and both basic and advanced directory/file management. I think that the two separate chapters on directory and file management could have been merged into one section, as the “advanced” tasks aren’t so advanced to get their own chapter. These tasks include copying the files from command line, linking files, Input/Output redirections and command piping.

After two chapters dealing with file and user information utilities and text editors, there is a 25 pages long chapter on File System Security. As the file system is a key resource on any computer system, it was expected that the authors would give some attention to this topic. The attendees of the Cisco Networking Program are techie oriented, security policies are covered within just a few paragraphs of text, briefly informing the readers on their role in the organization’s infrastructure. Authors mention some standard UNIX security features including user passwords, which are restricting access to the system, file and directory permissions, files containing information on remote logins and other features enabling the system administrators to check the possibility of security breaches. The next segment, covered in this section of the book, deals with file permissions, their octal mode and ways the user can change them from file managers and command line.

The last couple of chapters guide the readers through UNIX printing, creating and using backups, cutomization of the login environment, management of system processes, basic features of the common shells and network basics. The book ends with a nice finishing touch – career guidance for UNIX administrators. The chapter doesn’t offer anything revolutionary, but contains a partial reprint of “Careers in System Administration”, article written by Barbara Dijker in 1999. Following the article, the authors present some information on Sun Academic Initiative and Solaris system administration certifications.

As with the most of the Cisco Press publications, this book features a “Check Your Understanding” guide, which offers the readers a way to test their knowledge after each of the read thematical chapter. The answers to the questions are presented in the Appendix section. Other appendixes include a master command list, a thorough guide through UNIX commands and several reference guides.

This book is my first Cisco Press book that is accompanied by a CD-ROM, and I must say that this is a great addition. The masterminds behind this book didn’t stop with the question/answer scheme presented in the book, but also filled the CD-ROM with an interactive knowledge-testing guide. The Graphical User Interface of the e-Lab CD looks just fine and offers Flash based simulations of the Solaris command line interface. Couple of the CD-ROM screenshots, can be seen on the bottom of this review. The CD is intended for the Windows users (the program file is unix.exe), but the SWF files can be started on any Flash powered computer.

As the book is oriented to complement the Cisco Networking Academy Fundamentals of UNIX course, it will come quite handy for the students enrolled in that course. The information presented in the book can be useful to anyone interested in UNIX operating systems, especially Solaris. Besides that the word “fundamentals” is placed within book’s title, I should note that the book is suitable for the novice and novice/intermediate users. The authors did a good job on the content structure and made a useful UNIX basics guide. The CD-ROM is a big plus, but should maybe contain an HTML version of the interactive guide, making the non-Windows users enjoy the e-Lab simulations.