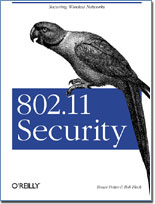 Usually when I’m choosing reading material needed to get reviewed, I first check if we have some O’Reilly books laying on the shelf. Since the fine folks at O’Reilly supplied us with a number of great publications I chose this wireless title. Today, I’m taking a look at “802.11 Security”, a neat little wireless security guide written by a two well known wireless experts.

Bruce Potter is the Manager of Network and Security Operations for VeriSign’s Mass Market’s division. He manages the security for over a hundred network devices and several hundred servers. He’s the founder of the Shmoo Group a web site for security, cryptography, and privacy professionals, and NoVAWireless, a community-based wireless network project in Northern Virginia.

The book opens with a brief overview of the wireless world, where authors introduce the readers to wireless networking basics. This is followed by a 10 page section that describes wireless security issues and has some great information on various Denial of Service attacks, which is one of the threats that you have to protect your wireless network from.

From now on, the book is divided on three parts, each covering an important security aspect of a working wireless network. The first part is concentrated on station security – methods for securing wireless client computers. Through this approach, the authors go further from network security and point out the usually overlooked topic of client security. This part of the book provides a number of important tips on securing FreeBSD, OpenBSD, Windows, Linux and Mac OS X client stations.

For those wanting to move away from hardware based Access Points, the second part of “802.11 Security” will come quite handy. Over here, the authors present information on converting your favorite non-Windows operating system into a full pledge wireless access point. The geek in you will surely find this information an interesting read. To finalize the whole thing, the last part of the book will, in the same practical manner, guide you through the process of setting up a secure Linux/*BSD gateway.

There is a relatively large number of wireless security books on the market. Most of them are concentrated on the basics and theory behind wireless networking, with a focus on security issues and protection mechanisms surrounding these networks. The smaller portion of the mentioned publications, dedicate most of its content to practical topics containing various setup scenarios and security tips. Potter/Fleck’s “802.11 Security” is a practical type of a book, with yet another valuable characteristic – it covers multiple Operating Systems. As about 90% of wireless security books base exclusively about Microsoft Windows, O’Reilly is once again breaking the monotony, so this book focuses mainly on Linux, OpenBSD and FreeBSD. Mac OS X and Windows are also covered, but just through the client security point of view.

The book is aimed at security and network engineers, system administrators and general WiFi geeks interested in creating and fortifying secure wireless networks. As Linux and FreeBSD receive the biggest exposure, general knowledge of OS specific installation and usage is required. I wouldn’t suggest the book to Windows-only users, as the authors don’t give much space to Windows operating systems.

Although the book presents an overview of Wireless communications and security issues, the focal point is to educate the readers how to setup a secure wireless network by using one of the mentioned operating systems (in client, AP or gateway scenario). By following the installation-specific parts of this publication, majority of inter-mediate readers will surely get enough info on how non-Windows systems can be used in various wireless network deployment phases.

Spread over just about 190 pages, “802.11 Security” is an easy to read technical guide that goes directly to the point and presents the reader with practical step-by-step information on creating a secure and stable wireless network. This book is surely a valuable addition to your bookshelf and will probably inspire you for using Linux or BSD system as your wireless network cornerstone.