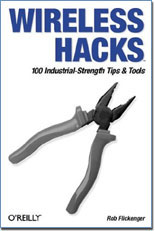 I’ve been wanting to get my hands on this book ever since I got the press release announcing this latest addition to the “Hacks Series”. When the O’Reilly folks sent us a couple of copies, I’ve already had a book or two in my queue, but as I’m a fan of Flickenger’s work (both the writing and the actual WiFi creations), it was a natural choice that “Wireless Hacks” received a high priority tag. After reading the book and testing some of the hacks I’ve learned from it, I’ll try to tell you what is so good about this publication.

Rob Flickenger is the author of two other O’Reilly books: “Building Wireless Community Networks 2/e” and Linux hacks. He recently served as sysadmin for the O’Reilly Network, and is currently working on promoting community wireless networking through efforts like FreeNetworks.org and NoCat.net.

By browsing the first chapter of the book, I was unpleasantly surprised – the first two dozens of hacks, weren’t the usual hacks I expected. If you are not introduced to what O’Reilly hacks are, here is a suitable sentence from the book’s covers: “O’Reilly’s Hacks Series reclaims the term hacking for the good guys – innovators who explore and experiment, unearth shortcuts, create useful tools and come up with fun things to try on your own”. What troubled me about the mentioned early hacks of this book was, that each hack didn’t talk about some geeky tool or a way to do something, but rather focused on one of the Wireless related protocols or services. So here the readers can learn about 802.11 (a, b and g), 802.1X, cellular data networks, Bluetooth etc. I’m not saying at all that these topics shouldn’t be included, but maybe they could be placed in some kind of introduction, rather than in actual hacks space. Nevertheless, the author shares his experience on the these topics, in the way of noting the pros, cons and recommendations for each issue.

Reading the first two hacks of the second chapter instantly reminded me about the essence of the books in Hacks Series – to provide extremely interesting tips and the tricks, that will tingle every geek’s imagination. Would you ever come to an idea to setup an automatic photo blog with a Nokia 3650 phone? With this great idea and Rob’s example shell script (as reprinted in the book and with an electronic copy located on O’Reilly Hacks web site), I’ll surely test this with my brand new Nokia 6600. For the Sony Ericsson fans, there is a smooth hack on remote controlling Mac OS X with their favorite phone.

The other two hacks over here will be of a great help to a number of Linux users. The hack titles clearly show their greatness: using Bluetooth with Linux, Bluetooth to GPRS on Linux, Linux file transfers and remote controlling XMMS with Bluetooth. All of these hacks were written by a contributor and provide a good scope on these tweaks.

The next chapter comprises of 23 hacks that have one thing in general – network monitoring. Besides the usual scanning, sniffing and network detection hacks you would expect in this chapter, there are a number of real juicy ones.

One of the cool ones is hack #27 “Finding radio manufacturers by MAC address”. I hope you didn’t expect that the author will just point out that IEEE has a web site that contains a database of vendor device MAC addresses. Yeah, he mentions the web site, but raises the stakes with a perl script that checks your local subnet and informs you on what vendor devices are connected to your (wireless) network..

Still isn’t enough for you? Would you like to use a sniffer that shows you in real time the graphical stuff the network users are currently browsing? Would you like to transfer your Apple Airport into a full-fledged Linux router? Interested in a do-it-yourself access point hardware? There is much more inside…

One of mentioned questions was derived from the fourth chapter of the book that deals with hardware hacks. Besides some informative hacks aimed to Mac users and wannabe users such as me for instance, the author shares some more practical tricks that actually made his geek-life more easier. One of his ideas will surely prove the geek type of quality articles that you can find in this publication – “What if you could house an Access Point in a package the size of a large light bulb and install it in an existing light socket?”. You get the picture, right? The chapter is fulfilled with a plethora of information facts on cabling, Host AP usage and cheap roof mounts. Majority of hacks are accompanied by images and actual photos.

Continuing the build-it-yourself idea, the fifth chapter concentrates solely on home made antenna building. As Rob was in the original set of people that designed the Pringles Can antenna, there is no point of speaking about the quality of the texts presented over here. The antennas that receive spotlight include: Pringles can, spider omni, pirouette can, primestar dish with waveguide feed, biquad feed for primestar dish, cut cable omni, slotted waveguide and a sample passive repeater.

The last forty pages of the book are reserved for ever present and, to us, especially interesting security topics. The chapter is opened with a text on the infamous WEP, where the author realistically notes that WEP is insecure, but on the other hand can provide a decent level of security if it is configured properly.

Administrators of public networks, will surely be interested in a couple of hacks that deal with NoCat’s tools for providing access control for their networks. The tools covered include NoCatAuth, NoCatSplash and Cheshire shell script. The rest of the hacks are as always informative and I’ll note just some of the most interesting ones: connecting two networks with vtun and a single SSH connection, tracking WiFi users with arpwatch and using SSH SOCKS 4 Proxy.

Wireless networks are something quite new for the majority of computer users. We know its pros and cons, its security issues, but we don’t have so much experience to create our own workarounds, helping tools and similar gadgets. Flickenger has that kind of experience and unselfishly shares that knowledge with his readers.

During one of my previous wireless themed book reviews, I noted that majority of the books discuss almost the same content. As expected, “Wireless Hacks” goes a galaxy away from those books and introduces the readers with just the perfect content to make itself an undisputed champion in its category. Highly recommended!