Learning how rootkits work can teach us a lot about an operating system. In Designing BSD Rootkits: An Introduction to Kernel Hacking (No Starch Press, April 2007), author Joseph Kong shows how to write offensive rootkits, defend against malicious ones, and explore the FreeBSD kernel in the process. As the first book to approach rootkits from a FreeBSD-centric perspective, Kong’s goal is to make readers smarter, not teach them how to write exploits or launch attacks.

While Designing BSD Rootkits focuses on programming and developing rootkits under FreeBSD, most concepts apply to other operating systems, such as GNU/Linux or Windows. Kong’s liberal examples assume no prior kernel-hacking experience. All code is thoroughly described and analyzed, and each chapter contains at least one real-world application.

* How to use call hooking to subvert the kernel

* How to defend against the attacks described 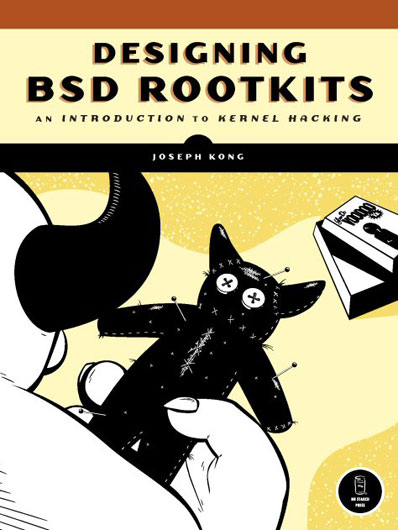 “The word “hacking” has a bad name, but there is more to hacking than breaking into systems,” said No Starch Press founder Bill Pollock. “This is not a book for script kiddies who just want to launch easy exploits. This is heady stuff. This is a book for real hackers who want to understand how the kernel works so that they can better secure their OS, whether it’s FreeBSD or other.”

Anyone with an interest in systems administration, open source operating systems, or computer security has something to learn from Designing BSD Rootkits.

About the author: Joseph Kong is a self-taught programmer who dabbles in information security, operating system theory, reverse engineering, and vulnerability assessment. He has written for Phrack Magazine and was a system administrator for the City of Toronto.