ElcomSoft has released v. 4.0 of the Enterprise version of its award-winning Advanced PDF Password Recovery software. This program makes it easy to remove both password encryption and usage restrictions from Adobe Acrobat PDF files. APDFPR Enterprise supports all Adobe Acrobat versions (up to 8.0), including those that use AES encryption, and super-fast guaranteed recovery of PDF files with 40-bit encryption using state-of-the-art “time-memory trade-off” techniques. 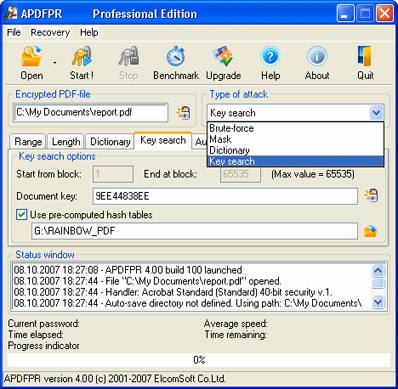 Ã‚Â
ElcomSoft has introduced new technology that ensures that all 40-bit encryption keys can be unlocked in minutes. Using the old-fashioned “brute force” technique, PDF files could be opened in four to five days. Earlier this year, ElcomSoft introduced a revolutionary “rainbow attack” subsystem. This “rainbow attack” system unlocked an estimated 99.9 percent of locked PDF files. Version 4 of Advanced PDF Password Recovery software, with its new “thunder tables” technology, raises the success rate from 99.9 to 100 percent of locked PDF files. While the additional .001 may not seem like a huge change, it adds certainty to the process, a critical factor for business managers and law enforcement officials.
Ã‚Â
ElcomSoft’s “thunder tables” technology involes pre-computing the decryption information that the software uses to unlock passwords. 40-bit encryption allows more than one trillion (two to the 40th power) possible keys. ElcomSoft’s new thunder tables technology ensures that all of these possibilities can be created from its pre-computed tables. The latest version of Advanced PDF Password Recovery software ships with a DVD that contains four gigabytes of pre-computed hash tables that will allow you to decrypt all PDF files in just minutes instead of days, even on slower computers. The DVD data can be read on any standard DVD drive, or moved to a flash drive.
Ã‚Â
Using a modern business computer, ElcomSoft tested its thunder tables technology on 10,000 PDF files with randomly-created passwords. The success rate was 100 percent. The average time to unlock a file was less than 30 seconds, with times ranging from a few seconds to nearly 15 minutes.