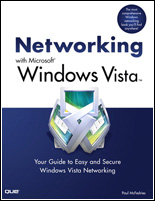 Although Windows Vista is not being adopted as fast as Windows XP was back in the day, this operating system is undoubtedly gaining ground and being introduced into places that require it to work with other machines on a network. This book aims to take the pain out of networking with Windows Vista and show you how it’s done. Read on to discover what it has to offer.

Paul McFedries has been programming since he was a teenager in the mid-1970s, has programmed everything from mainframes to desktops to bar code scanners, and has worked with many different languages, including Fortran, assembly language, C++, and, of course, JavaScript. Paul has written more than three dozen books that have sold more than two million copies worldwide.

The first part of the book will be very interesting to anyone new to networking in general. McFedries illustrates Ethernet and wireless networking as well as router configuration. You get a crash course on all the basics and then guidance to the configuration of popular routers on the market today from Netgear, Belkin, D-Link and Linksys. After going through this part of the book, you’ll have the basic material covered and you’ll be able to understand the majority of the options your router configuration screen usually offers.

Now that you’re armed with the knowledge to get down and dirty with Windows Vista, the author introduces its network tools and tasks. What you learn here starts from the very basics like viewing networked computers to customizing your network, managing wireless network connections and setting up a digital media hub. This comes especially handy if you’d like, for example, to connect an Xbox 360 to your network.

McFedries has dedicated a fair amount of text to one of the most important of topics – security. You learn about Vista’s security groups, user access control, the security settings of shared folders, using strong passwords, and much more. With wireless networks increasingly replacing wired networks everywhere, it was a good idea to include the most important security considerations for this type of networks.

I like the fact that the author gives the reader options. For example, while discussing Windows Defender he recommends third-party security software. This is exactly the kind of detail new users will appreciate.

The last part of the title deals with advanced networking as McFedries discusses remote network connections, networking monitoring and troubleshooting. New users will benefit from elements such as a bulleted list that covers general solutions to network problems. Now, before giving your experienced friend a “what do I do now?” call, you can make sure you’ve covered all the basics.

This book has an exceptionally easy to browse layout that makes it a perfect reference guide. At the beginning of each chapter there’s a bulleted list that outlines what it contains and special notes as well as tips are depicted separately from the text throughout the book. A variety of screenshots help you understand the text better and the only thing that’s missing is color, although that would have increased the cost of the title.

Networking with Microsoft Windows Vista contains information for both novice users as well as those who know what they’re doing but need to get up-to-speed with the latest Windows version. It really is a comprehensive Windows Vista networking title that deserves its place on many book shelfs.