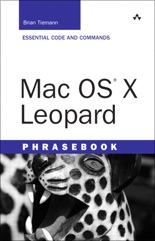 Mac OS X Leopard is the latest operating system from Apple that very quickly proved itself to be a great solution for a number of working environments. Majority of users are enjoying their Macs because of stability, as well as their very innovative look and feel. This book is aimed for those who want to check out what is under the hood and learn how to use the full potential of the command line.

Brian Tiemann has been a constant user of FreeBSD since his student days at Caltech. Born in Ukiah, California, Brian has remained in the state all his life; he currently lives in San Jose and works in the networking appliance field. Aside from FreeBSD, his other interests include Macs, motorcycles, and animation.

“Mac OS X Leopard Phrasebook” is rather enjoyable publication that crams about 280 pages of content in a pocket size format. There are a lot of people that are absolutely satisfied with their Mac computers and don’t have any needs to go deeper in its UNIX architecture. Fortunately for the rest of us, browsing the IT section in your bookstore will most probably show you a book or two that is focused on some of the inner workings of Mac OS X. On a recent 9+ hour flight I had to take for business purposes, my colleague suggested to check this book out. Reading the book was quite enjoyable and certainly made the time fly.

The concept of the book is organized around 15 chapters, each of them dealing with one of the functions your Leopard powered computer has to offer. The first four chapters provide an introductory piece for those that never had any Linux or UNIX background. In here, almost any type of user can get concise information on the structure of Mac OS X, playing with the terminal, as well as get introduced to the basic UNIX commands.

The chapters that follow build on the alternative ways of doing things such as working with files, burning CDs/DVDs, printing and playing with ownership and file permissions. If you have a little geek sitting somewhere inside you, you would surely be interested in how you can mimic actions such as Force Quit inside the command line and play with similar “textual replacements” to more “graphical” ways of working through your Mac.

The book overall contains a lot of information that will be too basic for anyone that worked in command line in his computer career, but on the other hand, you will surely come across some great ideas on doing the things that you couldn’t from that beautiful graphical user interface. In some cases I was expecting a bit more from some of the tips (for instance what to do inside the shell when kill – 9 doesn’t work), but I guess I should find some more obscure bug workarounds on the Internet.

“Mac OS X Leopard Phrasebook” is a nice addition to my Mac OS X part of the bookshelf. Its main positive aspects are good tips and tricks, nice writing style and its pocket size format which makes it easy to carry around.