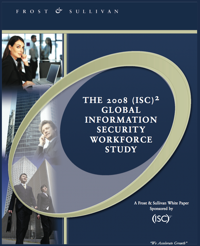 The 2008 Global Information Security Workforce Study was conducted by analyst firm Frost & Sullivan on behalf of (ISC)². It surveyed 7,548 information security professionals, including over 400 CSO and CISOs and other professionals with responsibility for information security, from companies and public sector organisations in more than 100 countries. Respondents came from the three major regions of the world: Americas (41 percent), Europe, Middle East and Africa (EMEA) (25 percent), and Asia-Pacific (34 percent).

Other study highlights include:

Frost & Sullivan estimates the number of information security professionals worldwide to be approximately 1.66 million. This figure is expected to increase to almost 2.7 million professionals by 2012, displaying a compound annual growth rate (CAGR) of 10 percent globally. EMEA, which is on track to grow by 13 percent from 2007 to 2012, is the fastest growing market for professionals. A strong outlook is also depicted for professional development in the sector, with the great majority of respondents expecting either stability or an increase in training budgets. Other highlights include:

For this study, Web-based surveys were distributed to targeted information security profession respondents worldwide in the third quarter of 2007. Approximately 20 percent of all respondents held executive positions, such as chief information officer or chief information security officer, while another 20 percent were directors or managers, and the remainder identified themselves as security practitioners, programmers, IT or network administrators.
To download a copy of the study, please visit www.isc2.org/workforcestudy.