From January to the end of March 2008, Sophos identified an average of more than 15,000 newly infected webpages each day.Ã‚Â  Most worrying for computer users, is the fact that the majority of these poisoned sites – 79 percent – are found on legitimate websites that have been hacked.Ã‚Â

February saw the website of UK broadcaster ITV fall victim to a poisoned web advert campaign which targeted both Windows and Mac users, while in March a Euro 2008 football ticket website was hacked by cybercriminals in an attempt to infect unwary fans.Ã‚Â  In contrast, just one in every 2500 emails is now infected, compared to one in every 909 in 2007.Ã‚Â 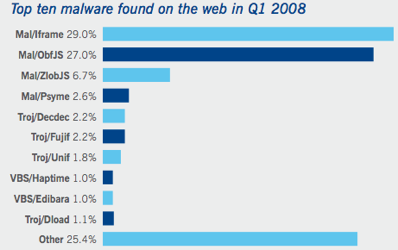 The top two web threats, Mal/Iframe and Mal/ObfJS, which are together responsible for more than half of all the online malware found by SophosLabs, are programmed by cybercriminals to infect websites by taking advantage of vulnerabilities.Ã‚Â  Sophos experts warn that companies can protect their network by investing in web security that scans a webpage for malware before granting access, while companies need to ensure that their web servers are protected against hack attacks.
Ã‚Â Ã‚Â Ã‚Â Ã‚Â Ã‚Â Ã‚Â Ã‚Â Ã‚Â Ã‚Â Ã‚Â Ã‚Â Ã‚Â

About 1 percent of web requests now deliver an infected page, most of which are legitimate websites belonging to people just trying to earn a living. Already in 2008 we’ve been reminded that it’s not just the small, independent sites that are being hacked.Ã‚Â  With compromised websites of household names now serving up malware, it’s more important than ever for users to ensure that they’re using a fully protected machine, and for businesses to protect their web servers from the risk of attack.