The percentage of phishing attacks decreased in May relative to other malware, according to threat statistics analysed by managed security company, Network Box.Ã‚Â  Phishing attacks, which made up 67 per cent of all malware in April, declined to just over 42 per cent in May.
Ã‚Â
Simon Heron, Internet Security Analyst at Network Box, attributes this change to an increase in other malware like viruses and offensive emails, possibly triggered by botnet activity.

The profile of phishing attacks is changing to much more targeted spear phishing and what’s become known as whale phishing, whereby company heads are targeted individually. However, there are still other significant types of malware around.Ã‚Â  This month, there has been considerable virus activity and we expect to see fluctuations in the make-up of malware.

Mytob makes an unwelcome comeback to the virus charts, in the form of mytob.dam, which accounts for 14.8 per cent of viruses stopped. First seen in 2005, this worm maybe experiencing some success as some anti-virus solutions clear out older protection to make way for newer threats.Ã‚Â  For the first time this year, nyxem was nowhere to be seen.Ã‚Â  Agent.rek tops the Trojan chart this month.
Ã‚Â
Korea is responsible for 21 per cent of the world’s intrusions, an increase from 16 per cent last month.Ã‚Â  The USA is still the single biggest source of spam (12.7 per cent) and viruses (14.8 per cent). 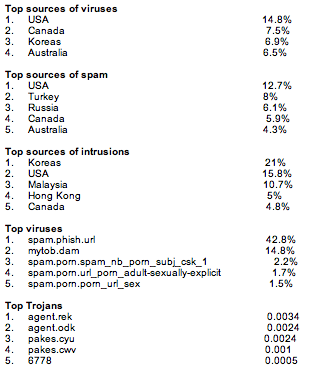