Tripp Lite, a manufacturer of power protection and connectivity equipment, has launched its latest range of Modular 3-Phase UPS Systems. The four new models, which include SU20KX, SU40KX, SU60KX and SU80KX, have individual capacities ranging from 20kVA to 80kVA, system capacities of up to 160kVA, operational efficiencies of up to 97 per cent and are configurable up to 160kVA. 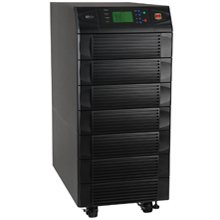 Collectively launched as the “SmartOnline’ Modular 3-Phase UPS Systems for 220/380V applications, the new range features self-contained, hot-swappable 20kVA power modules that are capable of providing N+1 redundancy for critical loads to seamlessly compensate the load in the event of module failure. Backed with 1+1 parallel capability, the “SmartOnline’ systems can automatically support the full load if one UPS is subsequently removed or taken off line for maintenance. In the unlikely event that a module fails, the remaining modules seamlessly compensate to support the load. The new models also feature 1+1 parallel capability, enabling two units connected in parallel to either provide 2N system redundancy or increase power capacity. Parallel connection can also be employed to double overall capacity. For example, two 80kVA units can be connected in parallel to support a load of 160kVA.