Nmap author Fyodor will soon be releasing Nmap Network Scanning, the official guide to the Nmap Security Scanner. From port scanning basics for novices to the type of packet crafting used by advanced hackers, this book suits all levels of security and networking professionals. Rather than simply document what every Nmap option does, Nmap Network Scanning demonstrates how these features can be applied to solve real world tasks such as penetration testing, taking network inventory, detecting rogue wireless access points or open proxies, quashing network worm and virus outbreaks, and much more. 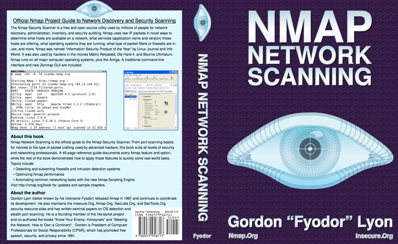 If you are attending Black Hat or Defcon, this could be of interest. Over his mailing list, Fyodor noted the following:

I plan to do the official release in mid/late September, but I’ve printed up 75 pre-release copies each for Black Hat and Defcon. The Black Hat copies will be available at the Black Hat Bookstore starting on Tuesday evening or Wednesday morning. Ã‚Â At Defcon the books will be sold by Bill Pollock at his No Starch Press table in the vendor area (starting at 10AM Friday).

I’m planning to do a signing right after my Black Hat talk in the bookstore, and right after my Defcon talk in either the QA room or the No Starch booth. Ã‚Â But the trick to get a book before they sell out will probably be to pick it up _before_ my talks, and then you can bring the copy to the signing.