ScanSafe launched Threat Spy, the first virtual map to show the increasingly dangerous Web threat landscape. Threat Spy displays malware as it is identified and blocked by ScanSafe, much like a Twitter map. 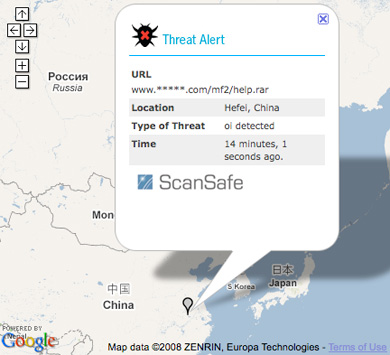 Powered by ScanSafe’s Outbreak Intelligence which includes, multiple malware scanning engines, Threat Spy provides up to date detail on the more than 100 million Web threats it blocks each month on behalf of customers around the world.

In addition to describing the type of threat blocked, the map shows the origin of the blocked threat and also the date and time of the block. The map is automatically updated every minute to show the most recent blocks.