Consumer interest in mobile banking and payments services offered by their financial institution has increased significantly in the past two years, according to new findings from a consumer research study released by Fiserv. Research revealed that 75 percent of those surveyed say they would consider using mobile banking services if offered. That’s up dramatically from the 49 percent who expressed a willingness to try mobile banking services in a similar survey conducted in March 2006. 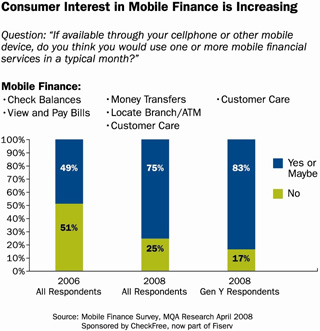 The new survey was conducted in April 2008 for Fiserv by MQA Research and was based on findings from 1,007 U.S. consumers at least 18 years and older, who use a cell phone at least once each week. The survey has a margin of error of plus or minus 3 percent.

Heavy users of cell phones and other mobile devices, as well as younger consumers, have the strongest appetite for mobile banking services that help them gain control over their finances with instant access to account balance information. Eighty-three percent of those ages 21-34 indicate they would consider using mobile banking services if available, compared to 75 percent among respondents as a whole. The most popular mobile banking activities among younger consumers include checking balances, locating an ATM or branch, and receiving and paying household bills.

Adoption of mobile banking and payment services is growing. When surveyed in 2006, use of a cell phone for financial activities was non-existent, yet two years later 23 percent of respondents say they currently use their cell phone or other mobile device to conduct mobile financial activities such as checking account and credit card balances or contacting customer care at a financial institution.

For those who have not yet adopted mobile banking, security continues to be a concern as 72 percent of survey respondents indicated they worry about the security of accessing their financial data using wireless devices. Yet, 82 percent of consumers say they would sign up with their financial institution for mobile security text messages that would alert them of password changes and other access changes, while 79 percent would sign up for account balance alerts.

Cost was the second-most cited concern (48 percent) about mobile banking services. The survey also reveals that consumers under age 35 are less bothered than older segments with traditional barriers cited in the study to new technology adoption such as lack of knowledge about how services work and the “loss of a paper trail,” making this 34-and-under age group a primary potential target for marketing campaigns launching mobile financial services.